Just when you thought the Apple buzz would calm… it accelerated and remained in the headlines. The analysis of what Tim Cook and other Apple executives laid out yesterday has to rehashed today. Why? Because they can. Only time will explain if the plans Apple is embarking upon will ultimately payoff for shareholders. Those who are patient in owning the stocks will likely be reward if the plan works, and it is worth the risk to ride out the current media blitz to see what transpires and how the consumer responds once it in their hands and on their arm. The chart below shows the volatilty of the stock near term, but that will die down as the media circus stops and the day to day activity returns. I would expect the uptrend to remain in play and a close below the 50 DMA would be the warning shot that things are not going according to plan. Expect more volatility in the stock as it move toward the balance of the year. 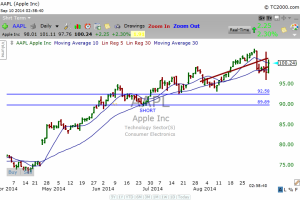 As if we drew it up on a chalkboard the S&P 500 index bounced off the support at 1984. This is the previous highs in July that we cleared in late August and leaves the question, can we move back to the highs from here?. Healthcare, technology and financials were the upside leaders on the day and we progressed forward holding the uptrend and a topping pattern on the index. The buy on the dip is still the theme as the buyers stepped back in following a day of modest selling. The NASDAQ was up as well on the day with the biotech, financials and large cap technology stocks leading the way. Priceline held finally at the 1175 mark and now looks for buyers to help recover from the aggressive selling in August. The Russell 2000 Small Cap index regained part of the drop from Tuesday holding the 5o DMA and support at the $115 mark on IWM. Overall nothing spectacular on the day, but enough to keep the sellers on the sidelines.

Biotech posted a 1.8% gain on the day to recover some of the leadership back. This remains a leading component of the broad markets and one we continue to watch as a barometer for the health of the market (no pun intended).

REITs (IYR) fell 1.3% on the day following through on the last two days of selling in the sector. Why the shift off the highs? Interest rate are climbing again as the ten year bond moved to 2.53% and up twenty basis points off the low the end of August. As we have stated many times the Final FOMC meeting will reduce the bond purchasing program to zero soon. The closer we get to this timeline the greater the pressure on interest rates to rise. REITs are interest sensitive assets and thus the move lower. The bigger question… how high do rates rise and what is the overall downside risk assigned to the REITs as a result? Break of the trendline would be my exit point for ownership near term. SRS is the leveraged short ETF for the REITs and it made the initial bounce today and the next level to watch is $14.90. This is definitely one sector to keep on your watch list relative to the downside.

Banks bounced back as well on the day to help lead the financials back from the selling on Tuesday. The regional banks (KRE) gained 1.3% and the large banks (KBE) were up 1.1% on Wednesday. This is one of the upside sectors of the market we are looking for leadership as interest rates rise and the economy remains stable. Never a guarantee, but I like the prospects going forward.

Overall positive recovery by the buyers to step in and help the indexes regain some near term confidence. There is still plenty to contemplate, such as what the President will say tonight about more involvement in the Middle East. Markets don’t like was and global economics are already a bit shaky to say the least. Watch and manage the risk short term.