Without a strategy picking or timing the end a trend or rally takes on a whole different level of importance. From my view that is why so much time is spent writing and talking about when a trend will end. Thus, the phrase overbought or oversold begins to take over the discussion as a trend matures or spikes in prices occur. The current move in stocks off the November lows are being discussed in terms of ‘all time highs’. Yes, the market indexes have hit new highs, but that isn’t a reason to sell or panic relative to your positions. Timing exit points on stocks has never been logical to me. How do you know the move is over… before the move is over, without a high degree of speculation or ‘future’ telling? Thus, the challenge that traders and investors alike have when it comes to exiting a position. Develop an exit strategy before the problems begin and know what the primary objective is behind each position in your portfolio.

Taking a look at the chart below how do you know that the stock has reached a high? The answer… You don’t. This is a chart of Apple in September of 2012 when two weeks later the chart rolled over to a 300 dollar decline or 40%. The point being, as time moved forward there events that told you the high was in and the downside was gaining traction. Missed revenue numbers as a part of earning followed by broken support and trend lines. It telegraphed the shift in the trend with an exit at the $660 level. I know, you gave up $50 off the high! Well worth missing out on the next $290 slide that resulted. You may have timed it just right to get out at the top, but having a strategy is always a better approach than attempting to pick the top. 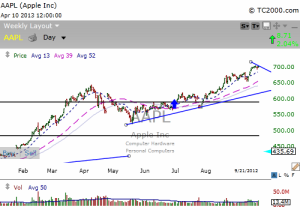 Looking at the chart below how do you know that the stock has reached a low? The answer… You Don’t! This is a chart of Apple currently. As you can see the lat month has resulted in a base with support at the $420ish level. The news, data and any other material you want to toss into the ring isn’t exactly flattering about the stock currently. You can see the attempted bounce in March that failed near the $465 level and has retested the support adding to the base building. The next test will be a possible move back towards the $465 level again. If accomplished relative to the current bounce it could complete a potential double bottom and reverse the down trend line to complete a upside buy signal from a technical perspective. All good… but speculation at this point in time. Thus, the stock goes on our watch list until which point and time it can validate the upside opportunity and define the bottom has been put in. Yes, I may miss out on a 30-40 dollar move before the entry level, but I also have less risk as defined by my strategy or approach to getting into the trade. Again having  a strategy is better than attempting to pick the bottom. 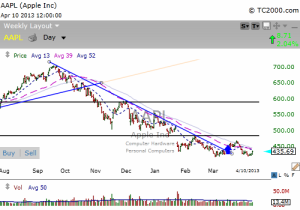 How do you know in either chart above the next step or direction the stock will go? Simply put you don’t! What you do know is that both are at levels they may turn up or down based on the market events taking place and the influence those events will or will not have on the stock. Those events can be in the form of news, fundamental data or many other indicators tracked by investors. Each person will have their own twist or interpretation of those events on the stock. In the end however, there is only one of two beliefs to have… the stock is going up or the stock is going down. Depending on your belief you will act accordingly now or wait for validation of your belief. The most successful investors, from my view, are those who validate their beliefs versus taking action without confirmation.

One simple tool that you can use to keep some of the emotions out of the decision making process on the top is to use a trailing stop that is defined by your strategy. The key is to manage the stop and not just have some arbitrary percent or dollar figure that it trails by. Money management is about strategy building and disciplined implementation. Investors tend to not like stops. The most common reason… they take you out of a position and then the stock goes up from their. Maybe it is because they fail to manage stop or we don’t understand how to use them to achieve the objective. Take some time to learn how to use stops to manage your money on the upside. They are an important tool in the investor toolbox.

The other use of a stop that helps you as an investor or trader is it takes the emotions out of admitting the trade isn’t working. If you have a position and it moves up and then proceeds to rollover and move lower, the general tendency of investors is to hold and believe it will come back. After all, our analysis can’t be wrong. Thus, we turn small losers into big losses. Not a good idea. If your belief about a stock is wrong it is better to exit sooner than later, and the stop allows you to exit the position without having to determine the selling point in the heat of emotions.

The same is true for entering positions off the low or defined bottom. You can use a buy-stop-limit order to enter positions at the level you desire to own them based on your analysis. These can be managed and directed by you as well. It is important as an investor to learn the tools available to you for managing your money based on your strategy and defined discipline. Managing money is all about knowing what tools are available and understanding how to use the tools to do battle with the market.