As you would expect the selling returned on Friday with nothing happening other than a meeting at the White House to confirm that the Senate will work on a deal and Congress will meet Sunday night. Now that is progress. Who will blink first and what will the outcome be over the weekend? Good question. There is plenty of blame to go around and the news pages are full of who they are. The real blame goes to the voters for allowing these people to control the budget the way they have and continue the deficit to run up without some type of balanced budget act. The real challenge this weekend isn’t just the cliff issues it is the debt ceiling limits as well. Oh what a tangled web we weave…

We broke support levels across the board and the implications are negative without some type of deal in Washington. As we saw in the late day trading the indexes lost more than one percent in the last hour on the news there would not be any deal or discussions on Friday. The downside is the play on no deal, the upside is a short term trade on a deal. However, because of the mess that has now been created, the downside is the more likely theme heading into the new year. No Santa Rally this year unless the trend takes a big turn on Monday.

Global markets remain the leaders when you scan the ETFs. However, if the US can’t get its fiscal house in order they will follow suit on the downside in reaction to the US markets. For me this is not a time of gambling on the outcome it is a time to hedge and unwind positions the best way possible. We have hit stops and raised plenty of cash to re position as the direction is determined going forward.

The index moved near the 1400 level of support today holding the downside move. No late day rally to rescue the index and the close was appropriate when you consider the current theme. The move breaks the uptrend as we establish a lower-low and take out the 1413 low on 12/14. This establishes the 12/18 high as the pivot point for the downside currently and we will track this going forward. The trend break is the exit signal short term for the index. A quick reversal would adjust everything, but then that depends on the news over the weekend.

The Santa Rally for 2012 has been a Grinch Rally. We can blame Washington for the direction, but the reality is it only accelerated what everyone has been discussing for some time. The economic data is overly impressive and the trend of growth has been very weak. Without the Fed intervention the markets would have been heading lower anyway.

One Scatter Graph below has a starting point of 11/15 which was the pivot point for the recent uptrend. The vertical line drawn on the chart shows the high on 12/18 which is the new pivot point for the current move lower. The second graph is the new pivot point on 12/18 showing the downside leadership from Energy, Consumer Staples and Utilities. Not exactly the group I would expect, but you play the hand you are dealt. The Financials and Materials have held up the best, but they are still moving lower.

The downside shift prompted us to add SH to our S&P 500 Model as a hedge. Manage the risk short term. 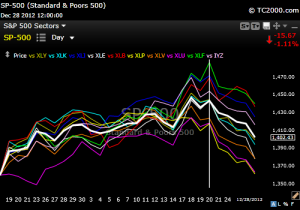 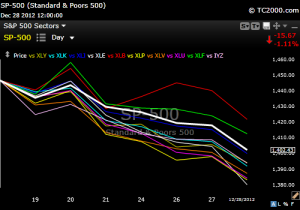 The VIX index jumped above 22.7 as expected, and shows the risk in anxiety from investors. VXX closed up more than 5% on the day. The clear move higher for the index is a negative sign for stocks and something we have to watch looking forward. The ETF gained more than 12% on the week as volatility rose.

NASDAQ Index – Stalled in a trading range of 3030 on the upside and 2960 on the downside. The index closed right on 2960 at the bottom of the current range and support. Similar to the S&P 500 index. The downside is set up based on the outcome of the Senate vote to avoid the cliff. Watch QID as the upside trade short term if the news is bad over the weekend.

Dow Jones 30 Index – Similar to the NASDAQ the index tested the top end of the trading range at 13,300. The support of 13,080 short term was broken Friday showing the worst results for the major indexes. The downside leadership put the short plays on the Watch List. Look for more leadership from this index.

Small and Midcap Indexes showed equal moves to the downside and are at support as well. The set up for short plays are there as well. The downside acceleration could be greater in these indexes if the negative sentiment grows.

Financials – XLF continues to struggle in the face of the broad markets selling. The pullback test near the $16 mark is worthy of our attention, and equally the upside is being tested. Watching for a play on the resolution to the fiscal cliff. the downside play isn’t there for now.

Basic Materials – XLB made a solid move back to the $36.80 support. The outlook is positive, but the risk is high overall. Watch for some clearly defined direction short term on the cliff. This is another sector to like on the upside if the resolution is found.

As seen in the chart above the downside leadership is XLP, XLU and XLE. Support for XLU is $34.40 and a level to watch. If we break lower $34 is the next level of support. This is another opportunity to add to positions if the sector holds support. XLP looks bad. The fall is back near the November lows. Why? Divided stocks have sold in the face of the capital gains and dividend taxes rising. Worth watching to see how they unfold going forward. XLE is interesting as crude has been rising, but the stocks are selling. This offers a short play in the energy stocks on the downside or a short play in crude oil. The latter is the more logical play if the downside in the stocks continue.

We have to be cautious here, but we also have to look at what the best opportunities are based on the current moves and what the outcome of the cliff is on Monday.

Dollar – Downtrend remains in play, but a bounce off the low has my attention short term. Needs to make a definitive move to the upside in order to play.

Treasury Bonds – The yield on the 10 year fell to 1.71% and the 30 year to 2.88%. The downside risk in Treasury bonds remains, but you have to respect the current fear factor. TLT broke support on the downside, but bounced back above the $122.50 level. watching the potential of a bond rally with all the negative talk around stocks short term.

The commodity sector continues to be a challenge relative to direction short term. They have bounced off the December lows, but lack much in terms of upside conviction. The volatility remains very much in play off the recent lows.

UGA – Gasoline fell to the 200 day moving average and has bounce off support. Bounced back to the $58 resistance level and broke higher on Wednesday. The test on Friday of $58 is worth watching relative to the upside trade. UGA at $58.50? Watching to see how it unfolds.

GLD – Since September 2011 Gold has not eclipsed any of it’s previous highs. GLD resistance is at $175. We are in the midst of a test of $161 on GLD and break below is a clear short signal for the metal. GLL moved above the $62 entry point and holding.  The downside play is the direction we are watching.

DBB – Base Metals failed to hold support at $19.10 after a positive move on the upside. The sector has struggled to hold the upside. Watching for opportunity on upside to continue.

The NASDAQ Global Market Index (NQGM) struggling to get above the 200 day moving average. The consolidation near the high is worth watch for a direction indication short term. The global markets remains a positive among investors short term. Money flow into the country ETFs has improved along with the upside gain. However, I would expect the upside to falter if the US doesn’t get a solution to the fiscal cliff.

WATCH: EFA – Moved above $55.20 resistance and the uptrend short term continues. Stick with the uptrend play for now as it holds support. The move lower of 1% on Friday is the warning if the US doesn’t find and answer.

WATCH: DXJ – Japan total dividend ETF broke higher, tested the support of the 200 day moving average and has moved higher. The break from the trading range was a positive trade entry at $33.25. Manage your risk and raise stop to $35.75. Falling yen is driving the stocks higher. Some topping in play – manage your risk.

WATCH: IEV – Europe continues to rally despite all the negative reports and sovereign debt issues. Why? Simply put the backing of the EU and the ECB (similar to the Fed in the US in 2009). The confidence that there is a back stop has brought investors back to the table. Looking at the daily chart for the last year we can see the break above resistance recently for IEV. Upside target is $45.50 going forward. Friday shows downside risk in the ETF.