Day 6 –  I feel like the scene from Poltergeist, “theirrrrrrr back!” Cyprus is becoming the gift that keeps on giving. As I stated in my notes this morning that the deal rumored was worse than the one last week and the market was poised to open higher? Well the balance has been restored as the markets sold off as the day progressed and investors decided they didn’t like the impact of the excise tax or confiscation of money from depositors to pay for the excess spending that caused the mess to begin with. The S&P 500 index gave up 0.3% on the day at 1552. The intraday swing is what was the most disturbing in the end. The key is to be patient and see how this plays out going forward.

Scanning the sectors for rotation we continue to see developments that are warnings in the making.

The focus remains on Europe and the ripple effect of Cyprus. There is no real way of predicting the outcome to this mess. We have to take it one day at a time and stay focused. The rotation of money towards the other sectors has not materialized to this point. Watch the downside risk as it is in play should things not pan out the way everyone wants.

Back to the downside as the worries globally return. Wasn’t as bad as it could have been, but then the upside hasn’t been stellar either. This is going to have to work itself out short term before any good comes of the current activity.

The February 25th low pivot point remains in play. We added the March 14th high as the next potential pivot point on the downside. I moved the line to today making it clear the sideways activity since the peak. The current trend is slightly down (0.7%). The early bounce turned selling today leaves us unchanged on the trend. The consumer discretionary (XLY) and financials (XLF) remain the leadership short term. Stay focused and protect the downside risk. 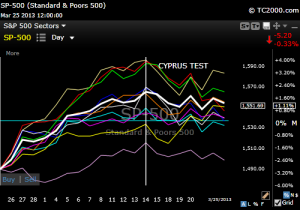 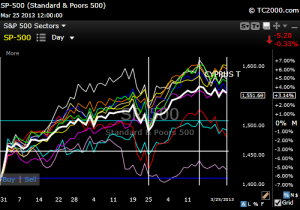 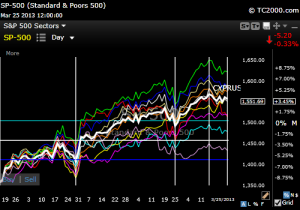 Technology – Becoming volatile short term and the downside pressure is building. Watch support at $30 on XLK. Closed at $29.97 and the 30 DMA.

Financials – The Cyprus initiative is pushing the sector back towards support at $17.90. Watch the outcome short term and manage your stops accordingly.

Energy – The sector hit resistance at the $80 level and tested lower. Watch for support to hold at 50 DMA. Volatility in play, but the uptrend is holding for now.

Consumer Discretionary – Broke above the $51 resistance on XLY. Made a nice move on the upside and has stalled off the $53 high. The stall is in concert with the broad markets, patience short term.

Treasury Bonds – The volatility in the bond sector has risen short term and it is causing grief for investors. Watch and protect on the downside. Estimates are for 2.75% on the 10 year bond by year end? Bounce in motion for the bond off the lows for now. Volatility is back.

High Yield Bonds – HYG = 6.55% yield. Support held at $92.75. heading to the previous highs near $95 Let it run as investors remain in love with junk bonds. I expect the trading range to remain near term.

Municipal Bonds – MUB = 2.8% tax-free yield. The price of the bonds broke support and the chart is attempting to bottom or build a base. The downside risk remains and this is a sector of the bond market to avoid for now.

Convertible Bonds – CWB = 3.6% yield. Price had been moving higher on the current rally in stocks. Starting to see some selling off the highs. Watch stops and protect your gains. 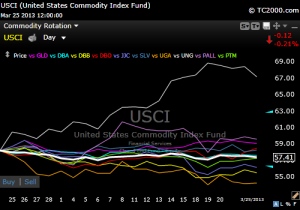 Global markets tested lower on the Cyprus news this week and volatility has kicked in since. More downside pressure as the Europe issue is back on the table.  The other shoe syndrome is still alive globally. Watch and protect is the mode of operation. 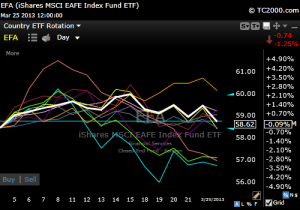 Real Estate Index (REITS) – Settling into a trading range near the high of $68.50-69.25. Sector Rotation Model