How big of an issue is the price of crude oil to the markets overall? Today crude fell four percent and energy stocks fell four percent. The broad market indexes fell nearly one percent and that would give us a twenty-five percent participation rate in broader markets to the downside of crude and one-to-one correlation to energy stocks. If it were only that simple we could make our portfolio adjustments and move forward. The relationship between crude and the overall equity markets is not interrelated nor is there a direct correlation, and thus we have the challenge we experienced today with rising volatility or uncertainty in the markets. We all know uncertainty is the one emotion applied to stocks that cause the most damage short term. Speculation if made believable will eventually create a stampede for the exits.

We can break this down into two areas of concern relative to the price of crude. First, is the sector relationship of how energy stocks will react to the price of crude oil both short term and long term. Second, is the economic impact of the price of crude on the economy both short and long term. To me the first issue is more direct in the correlation of cause and effect. If the price of crude drops the margin of profit on a barrel of oil, a gallon of gasoline, etc. drops, assuming the cost associated stay the same. Thus, we can look at the drop in energy stock prices over the last six months in regards to the drop in crude oil prices the farther have fallen the more acceleration on the downside for the stocks. Any way you look at this there will have to be stock price cuts to account for the drop in the price of oil and the impact to profits. How long before the impact shows up in the quarterly financials? Sooner more than later. Thus, prices are dropping faster on stocks. This brings with it the impact on expansion in the sector to drill, ship, refine, and more… thus we put a halt on growth and stagnate as a sector. Throw in the leverage within the companies taken on to expand operations for drilling, shipping, etc and it could compound the trouble as some point in the future. Thus, this to me is the greatest and most dramatic effect in the short term.

Second, is the economic impact and this takes longer to feel the effects as there are offsetting benefits of oil being cheaper. The consumer has more discretionary income around the world and that is positive to the economics short term. The longer term effects are slowing as less jobs, less taxes, less growth globally. Thus, the longer term impact is more dramatic to the economic picture and depending on how low prices go and how long they stay down will determine the longer term impact. Thus, economics of this will draw more speculation due to the lasting impact on the global economies. I am taking some liberties here not to belabor the point or to bore you with all the details, but we can all connect the dots of the domino effect of longer term excessively cheap oil prices based on how long they stay low, and how much lower they go.

Taking both of these issues into account you can understand the reactions short term in the markets… they are driven by the uncertainty of the issue and longer it is drawn out, the more uncertainty assign to this issue, and the greater the volatility of the markets will rise. In general higher volatility translates into selling and lower market prices overall. The challenge going forward is any attempt to measure or discount the impact of this event on stocks will lead to volatility, and that is where we are now. Expect more to come as the news builds relative to how it unfolds. Even if OPEC states they are willing to cut production 20%, it will take time for the impact to filter through the markets and stability to return relative to the price of crude. Thus, we need to take it one day at a time and take the trend as our guide… short and long term. The two charts below are first, USO which one ETF for the commodity of crude oil and the second, XLE which is the SPDR Energy Sector ETF. 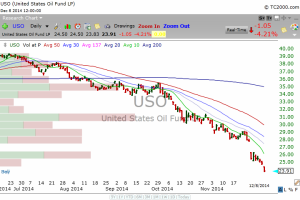 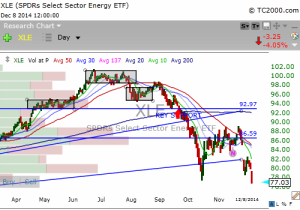 We can say that both are oversold technically, but we also know that when emotions are involved that doesn’t matter. If you still own the sector you have to protect your downside risk going forward. If you don’t own the sector, there will be plenty of opportunities created by this event going forward and patience is a virtue versus attempting to predict the bottom, let it establish itself and then make your trades. One day at a time with extreme discipline.