Two stories continue to drive investor reaction currently. First, the price of crude oil and second, stimulus both in the US and around the world. It is easy from a micro term level for the markets to become fixated on what I call events. And from that few it would be easy to call both of these items events, but in reality they have been trends in there respective sectors of influence for awhile. The last two weeks events within these trends have become disruptive from the perspective of creating a trend reversal or at least attempting to create a reversal. Here in lies the issue for the market. For  trend reversal to occur it takes a lot of prodding  and poking to change the mindset or psychology of the market/investors. That is why when the news hits the wire about Asia paying more for oil the price of crude jumps, speculation begins and that creates the beginning of a reversal. But, reversals need evidence to go with the speculation and that takes time to produce… and that creates volatility day to day as the ‘proof’ is produced. With that in mind, let’s break down both trends and the current events driving the movement of late.

If we start with crude oil the chart below shows the price of crude since last July when the current downtrend started in the commodity. This is when it was an event and when the event validated the downside risk in oil and turned into a downtrend. Since hitting the low in February it has essentially traded sideways in a range establishing a base or bottoming pattern. It is currently attempting to break higher from the range which would be the beginning of a potential trend change or uptrend. Thus, any movement on the upside or action on the chart that would establish the reversal is still only an event acting on the commodity to produce control that is leaning towards the buyers. It will take time to validate, but the news and events are exerting pressure on the upside. 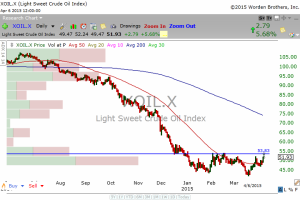 It is at this point and time that we as investors take note if the break occurs. Technically the chart would signal a possible entry point for crude oil. The challenge relative to the overall story for crude oil is validity of the speculation. First we have the issue of demand, is it really rising in Asia? If so we will see that show up going forward in the numbers. Second, demand in the US is rising? We have seen some bump lower in the inventory data, but not enough to validate the 10% jump in price. Again this will have to be validated going forward. Third, Iran and the supply being added back to the mix globally? No way of knowing about that issue, but definitely something to watch and validate. The point being, technically the chart is showing a shift in the trend, but it still has to become more than speculative news. It must validate factually for the trend to develop. Anything less is nothing more than a micro term trading opportunity which is fine as long as you trade it with that specific strategy and discipline in mind. Let it all unfold one day at a time, track it, validate it and trade accordingly.

The other trend discussed above is that of the Federal Reserve and stimulus. I would have to include the global view of stimulus in Europe, China and other parts of the world in most discussions, but for today we will focus on the US. That said, the biggest pain in the markets side right now is the US and it followed the FOMC meeting several weeks ago. The equity markets have bought into the Fed’s rhetoric that they have to be patient as the economic data has given cause for the pause. Cut it any way you want it has been an interesting chain of events that has set the current course of action in both stocks and bonds. The ripple effect as I call it is worthy of note and of course tracking as it unfolds.

First the chart below is iShares 20+ Year Treasury Bond ETF (TLT). As you can see the bottom established on March 6th coincided with the great announcement of how the Fed would determine the how and when they would raise interest rates. The rally from $123 to $132.70 added 7.8% to the value of the ETF. That is big when it comes to a move in bond prices. The belief in the Fed comments stalled for a couple of days, but promptly resumed to move directly to the current resistance at $132.70. The reestablishment of the uptrend in the bond is holding currently in a tight range as the story continues to unfold. As I have stated above trend changes take work and a lot of spears have to be stuck in the bull to kill it. Trend reversals are a matter of changing the overall sentiment and belief of investors and that is a tall order to fill. If the Fed continues to reassure investors that they will not act anytime soon… stocks will rally as a result. To that end the S&P 500 index has held the 2040 support level and mounted several attempts to move above the 2120 previous highs. For now it has been unable to override the other issues facing stocks, but the bigger issue of stimulus for now have been dealt with. On the horizon is the next issue of earnings. That story will take on its own characteristics that will influence the direction of stocks as well. We will address that story in a future post, but it does have everyone’s attention as earnings start tomorrow for the first quarter results. Without belaboring the point, there is plenty happening relative to the two stories we have been tracking relative to their current trends. Both continue to find ways to continue, but the news and events taking place currently are having an influence on the current trends. How it unfolds will take more time to determine, but both will offer trading opportunities from a micro term view, and when the trend confirms or starts anew, we will take advantage of the longer term opportunities. Remember patience will be rewarded more than forcing trades based on speculation.