Last week I asked the question of how high were gasoline prices going? The answer that has unfolded thus far is they have peaked short term term, but the trend line for UGA, United States Gasoline ETF is still up. The ETF is holding the 30 day moving average and facing resistance at the $63 level for now. This activity goes hand-in-hand with the price of crude oil. The test of support at $89.30 held and resistance at $93.20 is in play. Do these commodities remain in the trading range or is there more upside in the cards short term? 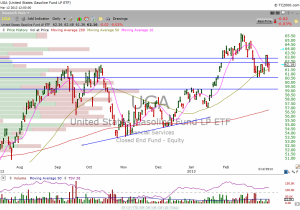 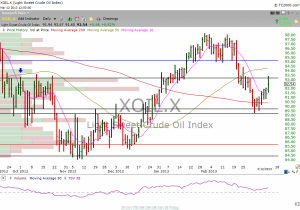 One thing we do know for sure is the speculation around the price of the commodities has died down. Crude oil was up on Tuesday and the inventory data on Wednesday shows a surprising decline pushing prices up slightly. The short interest is declining showing a drop in speculation relative to oil. The outlook for the US economy remains on the positive side and that is settling into the outlook for prices.

The artificial shortage of gasoline should abate in the coming months as refineries finish their maintenance programs and production ramps up again. The switch from winter production schedules to the summer schedules should bring production back in line with demand and ease prices at the pump. IEA estimates are for gasoline to fall to $3.55 per gallon at the pump. That would correlate with the price of UGA currently. Thus, the fund is likely to remain in a defined trading range based on the underlying data. Of course, that is baring any unforeseen speculation creeping back into the prices.

The same is true the economic data from both China and Europe the last month has curtailed the rising demand cries from analyst and speculators. I would look for the trading range to develop further and play out until the next speculation blather starts relative to the demand or lack of demand going forward. The primary objective at this point would be to remain patient and let the trend play out short term.

See the ONLY ETF Model for update energy positions.