Wanted to Publish this again from Sunday as some are asking questions addressed in this post – have great evening!

The question on most traders minds heading into next weeks trading… “is this the start of a correction or do we get an oversold bounce on the major indexes?” The answer is… YES! Based on what is present in the charts, the sentiment and the media it looks like more downside is on the way, but then that would invite the buyers to catch the falling knife and present a bounce. Let me be one of the few who will admit, I don’t have a crystal ball! When emotions and logic meet generally emotions win short term. If I had to chose a side the emotions of the times are in control, but eventually logic will prevail, thus my answer, YES. There is a high probability of a correction followed by a bounce off the lows as we all sort through the data and determine which side we believe more. I am not one for prophecy, but as the charts start to develop rolling tops or volatility near the current highs you have to ask the questions relative to what is driving stocks up or down and which is more sustainable or believable looking forward? The answer will then be validated by the charts as investors cast their votes by buying or selling stocks. Friday’s vote solidified the downside for the micro-term view, but it also broke the long term trendlines leaving investors in a precarious position if they still own long positions in their portfolios. This week will either validate the downside in play or we will see some buying to help negate the breaks lower. Either way it promises to be a bumpy week for stocks.

First things first, if the markets are to resume the uptrend they must first and foremost have leadership. Taking a cursory look across the major indexes and the major sectors you are hard pressed to find any. Biotech and parts of healthcare were one of the few growth sectors we found from the previous leaders still in position to bounce and help lead the a push back toward the upside. On the defensive side of the ledger we have consumer staples, utilities and large cap healthcare offering some support to the broader markets as money rotates to where is believes it will be treated the best looking forward. Fixed income is being led by Treasury bonds as yields decline on money rotating to safety. That would bring me to conclusion that there is a lot of work to do if any bounce is going to give the support or lift needed to rescue it from the current selling.

Second, the volatility index is a picture worth a thousand words. The chart below shows the last time the index peaked above the 25 level was 2011. If we wanted to draw any comparisons in cycles that is where I would look. Not because of the volatility index, but because of the what was happening in the global markets and the uncertainty of the US markets relative to forward guidance and growth. If the parallels are valid, and if the US markets do continue to struggle relative to the weakness in the global markets, and if the Fed withdraws quantitative easing and delays rate hikes until the summer of 2015, there is still the potential of a spike in volatility due to the lack of confidence in the underlying growth of the economy. That could translate it a correction that is more significant in nature. Target on the S&P 500 index 1730 would be in line. Please note — I am not stating that is the case just looking at what could be the worse case scenario short term. 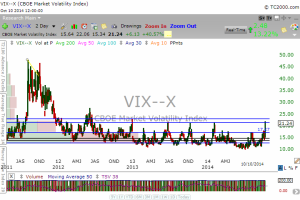 Third, leadership looking forward is a clouded issues among the seven asset classes. US bonds are leading along with the US dollar. Not exactly the making of a great story. The chart below is the a scatter chart of the seven asset classes since the September 18th high. Emerging market bonds have moved sideways and the REIT index has essentially done the same following a move lower prior to this point. The downside leader is the EAFE with emerging markets, US stocks and commodities not far behind. The chart makes the simple point there is no equity leadership as money rotates to safety short term. The longer term outlook is now being challenged by the follow through selling on Friday. Thus, short term leadership is defensive, longer term the leadership is rotating to defensive. If there is not a bounce of curtailing in the selling going forward the longer term views will shift to negative and validate point number two above. 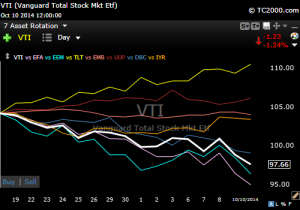 Fourth, earnings are starting in earnest this week. The revisions on the downside have been hurting the outlook as the S&P 5oo index has been revised down more than 5% since the end of August. Some have speculated the dollar will impact the large cap multinationals as the strength has been greater than many expected or hedged. Yes, a strong dollar will help longer term, but short term it does wage a toll on the US markets relative to exports, albeit helps on imports. The dollar has also played havoc on the commodities market as we have seen a drop in price in the energy space as well as the base metals. Precious metals have been speculated lower on the weaker dollar, but demand has played an equal role in that decline. Earnings could be an additional weakness for the current markets looking forward.

Fifth, global markets are weak economically and there is not indication of improvement on the horizon. The bantering and rock throwing from the IMF of late is not helping the matter either. If there is no improvement in the Eurozone, Russia, China and Japan short term what will be the catalyst for the global markets to improve longer term? This is the most uncertain of all the issues facing the US markets currently. Looking at any chart of the global market from the highs in June you see a confirmed downtrend in play short term. I expect this will continue without some catalyst along the way and currently there are no real catalyst from our perspective.

Finally, the Federal Reserve poses the most near term help or threat to markets domestically and internationally. The next FOMC meeting starts in just over two weeks and there are two primary questions that will need to be answered and addressed by the Fed. First, a definitive end to quantitative easing. Second, a idea of when or if the rate hikes will begin. The minutes from the last meeting were seen as dovish, but we will see how that unfolds in the comments following the next meeting. The challenge being that is all several weeks off. In the meantime is will be earnings that take the drivers seat.

The greatest challenge for investors is over-thinking and over-trading the emotions of periods such as this. Take a disciplined approach and remember cash is a sector and it allows you to be patient and let the story unfold and the clarity of the outcome to be seen. One day at a time is all we can do for now as it unfolds any hypothesis is validated or not by the charts.