The main headline today reads, “US Stocks Rally on Jobs Data”. I don’t know why the jobless claims dropping is a realistic reason for the rally when yesterday’s ADP report for private sector jobs was awful. Not to mention there are plenty of seasonal adjustments following the Easter holiday. Whatever the reason stocks moved higher… end of story.

Europe was mixed on the ECB cut in rates early, but gave in and rallied with the US markets. IEV was lower then rallied to recapture most of the selling from Wednesday. We are back near the breakout point for the ETF and looking for some type of follow through.

Why the selling response on Wednesday? That is the question we all want answered. 1)  economic indicators pointing to slower growth in April continued. 2)  earnings disappointment from some bellwether companies. 3) global economic data shows continued weakness in China. 4) Valuations are rich and need everything to go according to plan. After posting this comment on Wednesday our advice was to watch and see how Thursday would develop.

Why the buying response on Thursday? That is a question I would like answered, the hell with everyone else. 1)  Everyone slept on the Bernanke/Fed action and came to the conclusion that an engaged Fed is better than no Fed. They came in this morning and bought stocks. 2)  Hope that jobs are improving.  3) ECB cut interest rates and we get more money in the float from another central bank. 4)  Belief the jobs report on Friday will be better than expected. 5) Warren Buffet joined Twitter! The news is driving… that is all there is to it. Watch, set your stops and let it roll.

Tomorrow promises to be another day of fun filled data. Selling got everyone’s attention today and we now could see some more data relative to the direction overall near term. Take what this market gives and and manage your risk.

Jobless claims lowest in five years. A dip of 18,000 to 324,000 and everything is okay for jobs? Disappearing workers from the workforce? Seasonality of the Easter effect? Any number of reasons for the drop… but improved jobs is not one of them. Tomorrow will show what is happening in the jobs report and following the ADP data on Wednesday it is not expected to give much in the way of insight.

Productivity climbs again up 0.7% from January through March, better than the 1.7% decline in the fourth quarter. However, was less than the 1% growth expected for the first quarter. Pressure is building to hire workers as productivity has become choppy over the last year.

Trade Gap Shrinks 11% in March! Oil once again is the reason with imports the lowest in 17 years for oil. A lower trade deficit helps the growth rate (GDP) and this may push the first quarter number higher than the initial report of 2.5%.

ECB cuts rates 25 basis point to 0.5%. Inflation has dropped to 1.2% giving room for the central bank to act. The dollar rose on the news as well as gold.

Each test of the high has meet with some selling or resistance. My bias remains to the downside, but trend has held with the buyers stepping in at each buying opportunity. Today was no different as the broad index gained 1% today.  Here we are again! News is driving the market and it is evident in the chart off the April 11th high with the up and down movement. The data continues to show weakness in the economy, but the buyers keep stepping in with the belief it will be better long term. Today the jobless claims were better and that drove the market back to the previous high. I am getting seasick!

The April 11th chart below starts on the high as a potential pivot point lower, but failed to on the downside with a bounce on April 18th low (vertical line). Leaders remain telecom, utilities, and technology. Energy made a solid move off its low on April 17th.  Two concerns remain consumer staples (XLP) and healthcare (XLV). Both have struggled on earnings reports and the test is in play. Today’s buying negates a trend reversal short term. Discipline wins the race. 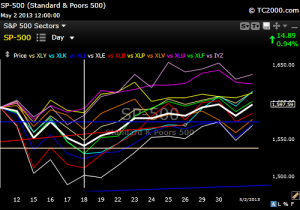 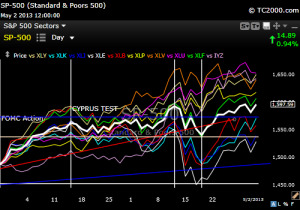 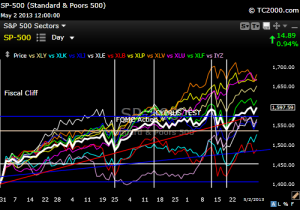 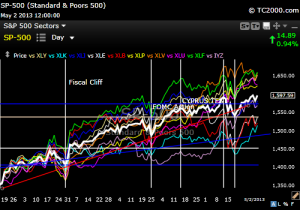 Technology (XLK) – Broke above the $30 level again. The key has been to buy the position as it moved and we have added to the S&P 500 as a trade. Solid leadership on the trading day for the sector. Wednesday reversed the move higher from Tuesday and testing the upside. Thursday reversed the selling and closed higher. Target now $31.65.

Consumer Staples (XLP) – the downside relative to earnings and warnings from the big cap stocks is and remains a concern. Tighten stops and watch how the trend plays out next week. Started off on positive note, but the sector is still lagging from earnings impact. Watch and manage the downside risk.

Healthcare (XLV) – the biotech stall from earnings is weighing on the sector for now. $46.80 support is level I am watching now (hit on Wednesday). Protect the gains is the priority. Large cap biotech took a hit and slowed the progress. Watch to see if we can regain the upside momentum. Tuesday PFE added to the misery downside with disappointing guidance. Exit on break of support. Nice bounce on Wednesday to keep the position in play.

Energy (XLE) – testing the move and resistance. Watch for a move above $77.50 as possible buy point on the upside. Need crude to behave and the earnings to be positive in the sector. All positive for now, watching the downside risk. Tested lower on Wednesday watch and protect the downside risk. Moved back near the high of Tuesday. Still like the sector longer term.

Telecom (IYZ) – Moving higher, but consolidating near the high. Still like the uptrend here and consolidating. Set your stops according to risk you will accept short term.

Since the high on March 27th the dollar has essentially moved sideways to down. Starting April 23rd the dollar has been steadily declining. The chart below shows the trek lower in the dollar. At the same time the euro (FXE), the yen (FCY), the Krona (FXS) and the Canadian dollar (FXC) have all started to move higher. Looking for a trend to develop short term. UDN is in play from the break of support on the dollar. Today’s bounce was of interest and we just have to watch the trend. 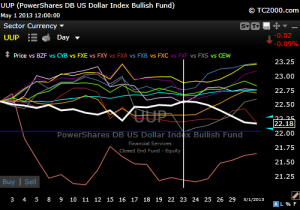 Treasury Bonds – Yields on the 30 year Treasury are falling again as fear rises? Concerns? Debt? Whatever the motivation money is flowing into bonds and is a indicator of money leaving risk assets like stocks.

High Yield Bonds – HYG = 6.5% yield. Support remains at $92.75. Move back above the previous highs at the $95 level. Manage the position for the dividend as the growth side is uncertain short term. Use $92.75 as the stop. The risk is rising with each step the fund takes. The spread to treasury bonds continues to shrink and the risk/reward is high. Reversed the selling on Wednesday with buying on Thursday. 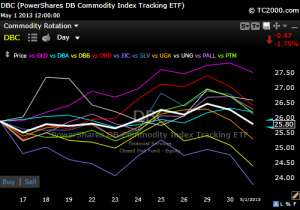 Global markets are trading in tandem with the US. No reason to be moving higher, but content to do so. China, Europe and Australia have taken on the leadership since the 18th of April. Watch and take what the market gives. Today they traded higher with the US markets. 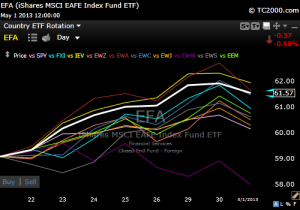 Real Estate Index (REITS) – IYR tested $70.73 support and is now back at the high of $72.50 and breaking higher Tuesday. Gave the gains back on Wednesday? Rose on Thursday? Watch as uptrend is still in play.