The broad indexes ended the day in negative territory as worries about the cliff start to weigh in. This is what we discussed last night as we creep closer to the deadline. Don’t be surprised to see volatility pick up as the bantering continues in Washington DC. The good news is Boehner and Obama are meeting tonight at the White House. Can’t wait for the outcome of that meeting.

Retail sales data for November was up 0.3%, but was below expectation at 0.4% growth. The number was flat ex-autos, but better than the minus 0.2% expected. Thus, the number was okay and didn’t rock the boat of most investors. XRT was up 0.5% at the open of trading on the news, but some of the boost came from the rumored buyout offer of $4-6 billion for Best Buy which jumped 13% on the news. Still a sector to watch going forward.

Jobless claims fell for the week to 343,000 versus the 370,000 expected and back to the pre-Sandy levels. This is good news as the number of job gains may increase for December?

Core PPI was up 0.1% and better than expected as well. The PPI fell 0.8% overall as gasoline and oil prices move lower. Inflation is working in favor of the Fed policies, but then it tough to have much inflation on a GDP growth rate of 2%.

Spending deficit was only $172 billion in November for the government. Thus, we better raise taxes $1.6 trillion… oops, that is over 10 years or $160 billion per year… oops, the $172 billion was for ONE MONTH! The train is out of control and there isn’t a conductor to slow it down.

Lots of news, but nothing to hang a rally on. We have to be patient and watch the downside risk as we still take it one day at a time for now.

The index moved to the top side of the resistance range at 1428 on Tuesday. Moved higher on the Fed announcement on Wednesday. Similar to the QE3 announcement, didn’t hold the gains into the close.  The key is to break through the 1430 resistance which was accomplished intraday, but not on the close.  The 10 day moving average has crossed up through the 30 day and the confidence has been building from investors. The concern relative to today, was the reversal and it could come back to be a negative. For now we stick with the trend and see how it plays out tomorrow.

The Scatter Graph below has a starting point of 11/15 which was the pivot point for the recent uptrend. The correlation between the sectors remains high with industrials taking the leadership role! That is not the sector you want to define the leadership. Materials bounced back from the selling in an attempt to play catch up, and the selling Wednesday is worth watching. Technology has struggled with the Apple saga, but posted solid gains  to bounce back over the last week. Strong leadership remains the struggle for the broad markets. Telecom has made a solid move to participate as one of the leaders the last week.

The chart is showing rotation to financials, industrials, healthcare and telecom as the leaders. Energy has made a turn off the low despite oil dropping back to $86. We continue to watching the jockeying for position short term, but we are still in need of a catalyst to the upside to break through resistance on the index. The Fed stimulus offered some hope, but based on the late day trading that hasn’t panned out. The market wants to move higher, and made a solid push towards that goal Tuesday. Watch to see how it unfolds. 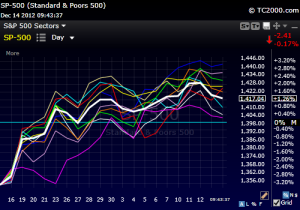 NASDAQ Index – Failed to hold above the 3000 level on the close, but is still in position to move higher if the fiscal cliff scare tactics subside from the headlines. All of the technology components with the exception on networking equally moved lower with the index. Apple moved back near support at $325 again today and that continues to be  anchor for the index. This is getting interesting short term.

Dow Jones 30 Index – The fell back to 13,170 after attempting to break above resistance at 13,300 on Wednesday. The key move to date is the move above the 13,080 resistance. Watch to hold support in trading on Friday or a test of 13,000 may be underway one more time.

S&P 400 Midcap Index – The bounce off the low has now returned to the top end of the previous trading range. A break above the 1000 mark on the index was a positive and a opportunity to trade the sector. However, we are now testing the move and need to maintain our stops on positions in the event the downside accelerates. Took the entry Monday on the move from the trading range. Reversal on Wednesday is the level to watch short term. Watch and manage the risk.

S&P 600 Small Cap Index – Stalled near resistance at the $77.60 level on IJR. Still looking for a break from the consolidation to the upside short term. The retest of the break higher is in play currently and we will watch to see how this unfolds.

The intraday reversal on Wednesday was negative and it followed through on Thursday. There is cause for concern on the move and we will have to watch how this plays out on Friday.

Telecom – IYZ broke through the short term resistance $23.90. CCI, LVLT and LUK have been leaders on the move off the low November 15th. AT&T and Verizon both broke from the consolidation to lead the upside today. Watch and play according to your risk tolerance.

Financials – XLF made solid move higher, but failed to hold the all the gains. The upside remains in play as we attempt to move above the September high. Banks attempted to continue the leadership, but fizzled in the end. KIE, Insurance ETF closed negative again on the day. The upside leadership is coming into question and thus, we have to watch the broad sector for a near term top.

Dollar – Attempting to create a low again. Still not interested in the dollar, but is does give insight in the global markets.

Euro – The euro dropped back to support and bounced on the dollar losing ground on the day. Watch FXE?

Yen – FXY tested support again at $119 and bounced two days and reversed to $119 again. We will watch to see how support holds? Broke support in two days has moved near the $117.25 support level now. Good for the Japanese stocks (EWJ, DXJ)

Treasury Bonds – The yield on the 10 year rose to 1.69% and the 30 year to 2.89% on Tuesday. held near those levels on Thursday and not much changed as TLT tested support at the 200 day moving average. The move lower pushed TLT lower from the consolidation wedge and triggered the trade opportunity on the short side. We added to the ONLY ETF Model WEdnesday. Watch and manage the short term risk as we know all too well on these bonds.

High Yield Bonds – Big bounce on stocks moving higher with stocks. Hitting resistance at the 93.80 level. Watch for a follow through move higher if stocks continue to rally.

KOLD _ Natural Gas broke support and continues to move lower. The short trade was up 2.4% today.

OIL – Oil is stuck in trading range too narrow to even trade short term. Patience as a play develops.

DBB – Base Metals are testing resistance at $19.40 on the upside and if we find the catalyst to move through that level would be short term trade opportunity.

The NASDAQ Global Market Index (NQGM) struggling to get above the 200 day moving average. The consolidation near the high is worth watch for a direction indication short term.

WATCH: EFA – Broke above the high at $55.20 and in position to continue the uptrend short term. Be patient and see how it play to start the week. ONLY ETF Model.

WATCH: DXJ – Japan total dividend ETF broke higher, tested the support of the 200 day moving average and has moved higher. The break from the trading range is a positive with a trade entry at $33.25. Manage your risk and raise stop to $33.70. Falling yen is driving the stocks higher.

WATCH: FXI – China gapped higher followed through on the upside. Clearing the $38.10 resistance on FXI is testing the gap higher and watch for the $36.65 level to hold as possible entry play short term. The economic challenges facing China moving forward are many, but investor are willing to look past that and believe in the trend. Gap higher on Monday as money rotates into the ETF.

The sector broke support tested lower and then reversed along with the broad indexes. The fear generated by the fiscal cliff issues sent the sector lower. The reversal is worth trading if the cliff issues remain at bay short term. Tested back today on broad market reactions to the cliff.

WATCH: PAFCX – bounced off support near the $11.66 mark. Held the uptrend line and support. HOLD. Watch the selling on Thursday’s impact to the trend.