The children in Washington continue to play games relative to the budget, but the real challenge is the debt ceiling which is drawing closer to the deadline. I am sure we are all sick of this already, but the reality of the situation only gets more challenging when the President is quoted in the media as saying, “I will not negotiate!” Thus, the market reacted this morning with some selling, but did manage to bounce back throughout the day of trading. All said, this is not a market to be challenged, up or down. It is Choppy, Without Clarity, Volatile Intraday, Emotionally Charged and Dangerous, I think that summarizes my view. We continue to keep plenty of cash on the sidelines and patiently wait for the opportunity to jump in when the water is not quite as choppy. By the way, there is a 5:30 pm EST meeting at the White House to discuss the non-negotiable terms of both the budget and the debt ceiling. If it isn’t negotiable then why have a meeting? We will find out later tonight.

State of the Market:
The major indexes remain more nervous than a long-tail cat in room full of rocking chairs. The weakest index (Dow) tested below support at 15,100 intraday, but managed to turn above that level before the close. This is still the leader on the downside and one to watch for indications moving forward. The NASDAQ moved to a new high at 3817 on Monday, tested the move early and closed at 3815 today. This is still the leader along with the Russell 2000 Small Cap index. The S&P 500 index tested the 50 DMA and bounced back to close off only 1.5 points on the day at 1693. The worry is the test of the 50 day. Looking at our sector rotation chart from the weekend update with the September 18th pivot point, energy and industrials flip places, basic materials, utilities and telecom pushed to the upside, but overall still no clear leadership on the upside. The sub-sectors are showing more life which tells you this is a stock picking market with plenty of intraday volatility and a lack of conviction.

Stock of the Day: Priceline (PCLN) – Up 2.8 percent today gaining $29.11 to close at $1067.38, another new high for the stock. After finally making the move above the $1000 mark the stock has gained better than 6% the last couple of days and continues to show solid upside short term.. The stock is up 72% for the year and continues to prove the doubters wrong. If you own the stock keep your stop at the 10 or 20 DMA and let it run.

Reversal of the Day: United States Oil Fund (USO)
Crude oil has been pushing lower and testing support near the $102 mark. After a week of testing against support today crude jumped back to $103.85 up 1.7%. That sent USO bouncing off support at $36.50 and to resistance at $37.40. A move above $37.50 gets interesting short term. Equally interesting was to watch the bounce in UGA which failed to impress. With support at $55.75 the ETF held and bounced, but the downside is still firmly in control. Both are worth watching to see if any follow through creates or establishes any trading opportunities.

Chart of the Day: iPath S&P 500 VIX Short-Term Futures ETN (VXX)
The lows established last week gave way to this weeks rise in volatility. The move above $14 has been interesting short term as a trade opportunity, but a move above the 50 DMA and $15 mark would show uncertainty building in the S&P 500 index, and that is not good news for stocks. Watch to see how the volatility of the market index plays out short term. 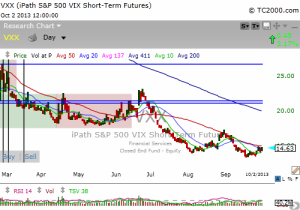 Economic Data:  The ADP jobs report did not help matter this morning as the numbers were below expectations and the August data was revised lower. The private sector is slowing again in the addition of jobs. Some are blaming the Healthcare Act, but no one is going to really tell us to truth about the cause, we can only see the effect, both short and long term. It is likely the jobs report on Friday will be delayed due to the continued shut down of the government.

Tuesday the ISM Manufacturing was released and it was better than expected at 56.2% and hitting a two year high. 55% was the expected report showing the continued improvement in the manufacturing space. Markit PMI was unchanged at 52.8%. Vehicle sales were lower at 15.3 million versus the 15.5 million expected and 16.1 million in August. The construction spending report was delayed and tomorrow we have the ADP Employment data. So far the improvement over August looks to be on the right track.

We have discussed the need to respect and manage the risk of the choppy markets and keep you emotions in check. Let your trades set up and never assume anything. Monitor your stops to protect the principle and stay focused on your discipline! Let the charts validate and confirm the trades before you put your money at risk. Missing trades today may be a blessing tomorrow in this current state. Be sure to follow along with the Pattern Trades posted each morning along with the Research notes. These are a great tutorial and practice for learning to deal with the trading process. Entry, Target and Stops.

Discrepancies remain in the markets

The "recovery" stocks are holding up well, but growth and stocks continue to struggle, keeping the [...]