Tuesday was another day of choppy markets. Those with news moved higher, those playing catch up posted gains and those ahead of themselves produced inside trading days. All of the move validating some consolidation taking place from the solid moves higher of the the April and May lows. For now my view is consolidation and digestion of the move more than any signs of a reversal to the downside. The sellers are being aggressive and the VIX index is still too calm. We stated last night that technically the markets do look extended, but until the sellers are willing to exert themselves the buyers are in control. That remain our view for now.

Remember this is a slow economic data week and until the retail sales numbers on Thursday traders will be left to their own devices for direction… so far choppy. That by itself should make it interesting. The goal is to take what the market offers and to manage the risk in the process.

NO video updates tonight our internet IP was hijacked! Seriously… it should be up and running tomorrow according to the powers that be! I have never heard of such, but then that is why there are criminal minds at work. Added more notes below that I wanted to cover in the video.

The bump in yields on the thirty-year treasury bond has caused some havoc in the sector and the chart below shows the move off the low the last two weeks. A move above the 3.5% yield could be a negative for bonds. As we stated above that puts the short play against the long bond in play potentially. 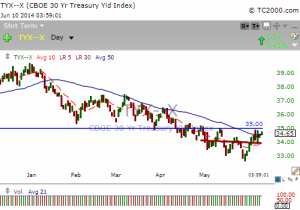 The dollar made a bounce off the lows in May as the ECB announced they would offer more stimulus to keep stagflation or deflation from hitting Europe. The euro moved lower and the dollar higher. Since that point the dollar has moved steadily back towards the March high. A break above this level would open the upside for the buck to move back towards the $22 level. 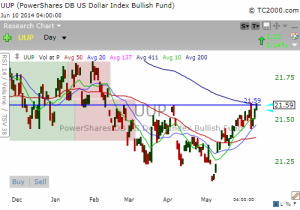 The choppy moves the last two days would be considered consolidation currently and we are watching to see how it progresses from here. The May sales report will be out on Thursday and could be the next data point of note moving forward. Take what the market gives and keep pushing forward. Manage your stops to control our downside risk.