The markets are slowing waiting and anticipating what will take place in Jackson Hole when Mr. Bernanke wows the crowd with a brilliant speech on the economy, and how the central banks will rescue the trouble ridden US economy with more money. Yes, I am embellishing a story that seems to never end. Enough on that, what is happening in the markets of interest?

The developments in China over the last few weeks technically are very interesting. The chart below of FXI, iShares FTSE/Xinhua China 25 Index ETF validates the downtrend is still in play off the February high. The test of support at the $32.50 level in June – July followed by an attempted rally, that has now failed and is heading back towards the support at $32.50 again. Since the ETF is only a glimpse of the Chinese markets, a look at the Shanghai Composite shows a break below support at 2100 and a technical break lower for the index, confirming a 42 month downtrend. Together with the economic data China is in a confirmed downtrend and unless there are some key changes short term is heading lower from here. 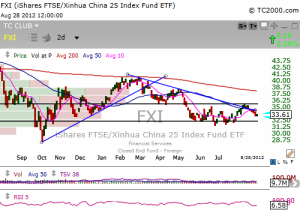 The chart of FXI tends to reflect more of what is taking place in the Hong Kong markets that Shanghai, but it is still offers a investment opportunity with enough volume to trade. ProShares offers the inverse fund, FXP which is two times leverage short the same index as FXI. The downside play has been the right call since the high in February. The reversal from the attempted break of the downtrend line on August 9th puts the downside back in play with the next challenge being support at the $32.50 mark on FXI. The downside play is still the trend for China based on the charts.

The fundamental data has the appearance of being okay in China as GDP  growth is running 6-7%. However, the stocks don’t reflect the reported data. Thus, there is global concern of how weak China really is looking forward. It is important to note that the growth has slowed from 9-12% to the current levels, thus impacting stock prices. The downside plays in China remains the call for now. The rally cry by analyst to buy at these levels may prove to be right in time, but for now the charts are not reflecting, nor confirming any buying opportunities.

The US data shows a GDP growth of 1.5 – 2% growth, but our market indexes have fared better than China? Slower growth yes, but the decline has been from 3% GDP to 2% GDP. Thus, the ability to absorb the decline in stock prices has been easier. That doesn’t necessarily put the US in a class of leadership, but it does validate that money goes where it is treated the best, and currently that has been US stocks.  The bottom line is the global economies have slowed significantly and they are not bouncing back. This is a reflection of the times and more importantly shows quantitative easing or other forms of stimulus are not working in the US markets. China’s recent rate cuts have not produced a bump or the stimulus in growth either. None of this is good news, but it does put in perspective the current market environment we face as investors.

The US markets have been attempting to bounce higher on the promise of stimulus. The reality remains, slower to stagnate growth in the US economy. Eventually investors price stocks at the level they deserve. The challenge for you and I, don’t be overly exposed to the downside risk that is present at the current levels as it realtes to the current growth outlook for the US economy.