As we close the week with the Thanksgiving holiday below are some charts to watch the last full day of trading and into next week. We are in a position of concern relative to data points. As I discuss regularly in my webinars there are three potential impacts to the market and depending on which category they fall into, news, event or fundamental, will determine the time frame and depth of impact we have to be concerned about going forward. On Tuesday we had economic data in the form of the consumer sentiment falling more than expected. I classified this as a potential event more than a fundamental impact on the market. The data is derived from a survey and not hard data such as sales, etc. Thus, it could be a short term emotional reaction from those surveyed as to how they see things in October. This November and we are heading into December next week. I am more interested in the sales data for November and Black Friday than how consumers responded in October. Thus, looking for this to be more of an event than fundamental.

The second issue that is building momentum the last two weeks is the price of crude oil. It closed below the $74 level today in response to a meeting with Venezuela, Russia, Saudi Arabia and Mexico to address potential cuts from these countries prior to the OPEC meeting on Thursday to discuss the same issue. The response was no to the production cuts from all involved. That put investors on edge as the supply side remains larger than the demand and thus prices are falling. Good for the consumer buying gasoline, but bad for the economics of the US energy sectors as the cost to produce oil based on the new technology would become cost prohibitive at some point and that will impact profits and stability of the sector going forward. This is a fundamental disruption to a sector that could be farther reaching than just the 11% weighting to the S&P 500 index, and could be catalyst to the markets testing lower. Definitely something to watch moving forward.

The first chart below is the Retail ETF (XRT). We got the break above the $88.60 level we wanted heading into the holiday season and the expectation would be for better sales than projected for the holidays. That was gaining traction and then you have today’s news on the consumer sentiment and it is being questioned. Watching to hold above $91.50 short term. 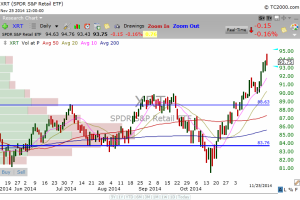 Next is the Homebuilders ETF (ITB). Similar to retail the chart shows the break above resistance at the $24.25 level and has continued to move higher on positive sales reports and data in the housing sector. The concern now it the home prices released this morning showed no growth. On one side that is good for the buyers to stay engaged, but on the other hand it could impact earnings for the builders as materials cost continue to inch higher. Watching to see how it plays out moving forward. 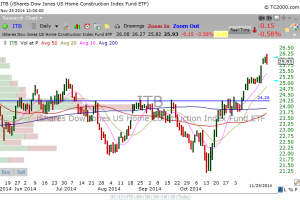 Next is the US Crude Oil ETF (USO). The downtrend is firmly in play and this is not a new development relative to crude prices. The decline of 28.7% since the highs in June is significant and if the supply issues discussed above develop into bigger news the speculators will push this lower quickly as it we are breaking below support again. SCO is the short ETF for crude oil and may be the right side to remain on going forward. 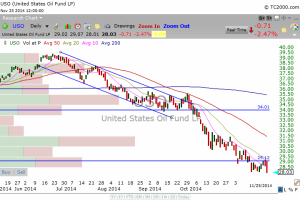 Next is the SPDR Energy Sector ETF (XLE). The attempted bounce off the lows in October is being challenged by the news surrounding crude. The mini uptrend off the low is still in play, but it the supply demand picture gets any worse or is perceived to be getting worse this trend will break and the downside will resume. There is plenty of work left to be done short term, but the worries are on the table. DUG is the short ETF for the sector. 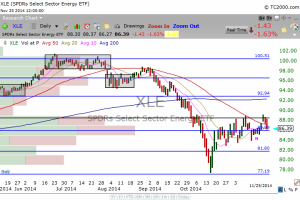 This could be trend changing short term or it could just be hot air that blows over in time. The ideas behind market moving data is to classify it into news, events or fundamental. News leads to short term speculation that last days to a couple weeks before being validated and builds and impact longer term, or it is purely speculation and disappears as quickly as it came. Events tend to be similar in impact, but long term in effect. They tend to feed on themselves as data validates and the validity of the data causing the market event short term. Fundamental is the longest term impact and the hardest hitting. It takes time to develop and be believed, but once it is validated the downside impact is substantial and destructive to market sectors or the market as a whole. The developments evolving now, discussed above, could have greater impact as the data is validated. If however, it is not validated the upside reversal reaction will be the trading opportunity. Either way these issues are worthy of our attention for the opportunities they create.

Have a Happy Thanksgiving, and Thank YOU,  for being part of our world and website.