The broad market indexes were volatile intraday as investors continue to deal with events, news and lack of clarity. As I have state several hundred time the last six weeks the greatest enemy to the current market environment is the inability to gain any clarity looking forward and that undermines confidence and subjects investors to the emotions of day-to-day events and news. Today we started with the protesting in Hong Kong disrupting the global markets. The chart below of EWH shows the break of support and the close on the long term trendline brings the threat of further downside for the country ETF. This is something to watch as the ripple effect to China (FXI), EAFE index (EFA) and Emerging Markets (EEM) added further disruption to a sector that was already struggling in a micro trend downturn. This a geopolitical risk as pro-democracy protesters are not backing down from the Chinese rule and changes. While the impact is temporary in nature, it could have longer term impact on the stocks in these sectors. 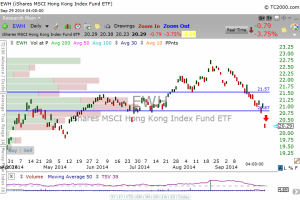 Crude Oil (USO) completed a double bottom and attempt at a reversal for the price of crude oil. The downtrending channel is giving way to some positive pricing in crude. The question is weather this comes as a result of demand (not likely) or speculation (more likely)? The speculation is being driven by the Middle East unrest with the Islamic State and the US Allies. Production disruption is a concern and that is helping bolster prices currently. This is a trade set up only and one that should be monitored carefully if any positions are established.

The energy sector (XLE) has taken it’s share of heat as a result of the decline in crude prices. If the sector reverses on the move in crude then we would have to take it more seriously from a longer term perspective. The stocks will be less likely to make a big move if the belief is speculation is driving prices on crude oil. Patience is a key factor in taking any positions short term currently. 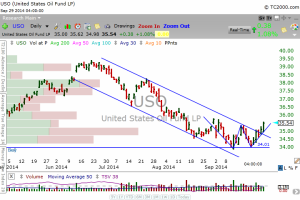 The Volatility Index (VIX) is heating up as the news and events shake investor confidence. As you can see on the chart below we challenged the August highs today, but there is still work to do if the nerves of the investors are going cause any serious shakeout in stocks. The selling has been minimal at this point, but the warning shots have been fired. That doesn’t mean the downside will materialize as being prognosticated by analyst. Time will tell as well as the VIX index which still isn’t overly convincing the sellers have gained firm control of the direction. Trading the index (VXX) has been profitable over the last four weeks. Time to lock in some gains and see how it unfolds looking forward. 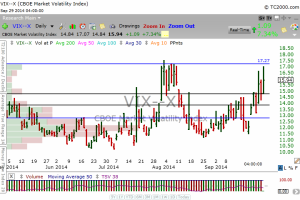 We are looking for support on the Russell 2000 Small cap index at 1110. We tested that level again early in the trading day, but managed to move back into positive territory prior to the close. Too much downside for a intraday reversal to gain traction? Worth our attention as well. The previous leaders of technology, energy, consumer discretionary and industrials are all testing lower and challenging the uptrend for the broad markets. The bounce back from early selling today was a positive, but there is still pressure from the sellers to take the index lower. The current tug-o-war will be won eventually, but for now investors continue to push and shove for momentum. Patience as this all plays out.