Europe (IEV) tested support at the $43.13 level on Wednesday and held leaving an infamous doji candle on the close. The challenge being a upward move to reverse the trend or down to extend the downside? The index has reversed roughly five percent since hitting the recent high in February. The strong dollar and weakening economic outlook for Europe have been weighting on the country despite the promise of more stimulus from the ECB. Shorting the euro with EUO has been the better way to trade the recent move in Europe (up 16% during the same timeline as above)… had we only known the dollar was going to go vertical from the last consolidation phase. Still watching to see how this unfold relative to support and the next opportunity if any that will result. 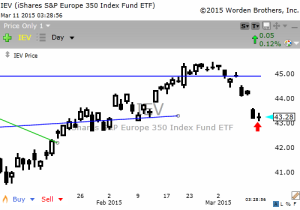 Gold (GLD) has been another sector that has received plenty of press about the upside opportunities going forward. The rational… global inflation with all the stimulus and free money in the float. The chart below shows the solid rise on this argument from November through late January… but, since peaking it has decline back to the November low erasing all the gains from the speculation. This also pushed the gold miners lower as well, but you have to stop and ask yourself it this is overdone? Again this is another sector worth looking to see how it handles this next level of support near term. One other idea to keep in mind is what the opportunity for the large more solvent miners to buy out the smaller or financially strapped miners at low valuations, given the price of gold, and the probability for the higher prices near term. It is worth putting on a watch list and checking in on from time to time to see if the opportunity develops. 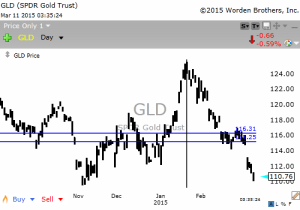 The S&P 500 index is testing the trendline off the October low. This would be the short term trendline and a break below this level would open the argument for a larger test on the downside. I discussed this in the video posted last night. The potential test of the 1990 ish level is not out of the question from my view, and considering the worries being pontificated currently the sellers could wrestle control from the buyers near term. How do trade this? A short opportunity for a trade came on the break at 2090 for traders. The break of the 2063 mark open the short term trade opportunity on the downside for the index. Establishing a short position now elevates the risk of the trade as it would be approximately 50 points or about 2.5% on the downside. Any trade opportunity is about the risk/reward of the trade relative to the time line. How this unfolds on Thursday will be of interest to me short term. 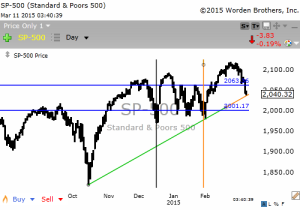 The Russell 2000 index was pushing higher off the January lows, but met the same fate as the other indexes… selling. The index did break the trendline on Tuesday at the close, tested lower this morning, but managing to squeeze out a close above the trendline on the day. The index was also the leader on the day to add a positive to the move. That doesn’t erase the worries relative to the downside for the index and worth watching as well. The 1200 level still offers some support along with the 1190 mark. I was looking for some leadership from the sector to start the year, but that never materialized as it continues to drift along with the other indexes as a follower versus a leader. Could offer some trading opportunities going forward up or downside.

There are other charts of interest, but these are on my short list heading into the trading day on Thursday to confirm the selling is going to continue or show some upside positives to keep the short term trend alive on the upside. This is a choppy environment and it has turned into a traders market… plain and simple. Patience is key along with extreme discipline going forward.