Financials (XLF) felt the aftershock of the news from the Fed announcement on Wednesday. As you can see on the chart below the sector reversed back below the $24.60 break through resistance. You can see the support levels on the downside based on the technical data and the key is to hold the 200 day moving average for now. This is a direct hit from the FOMC news on stimulus remaining as is for now or zero percent interest rates. There is no conclusion conclusion obviously at this point and I am only stating what happened today and what we will have to watch going forward. 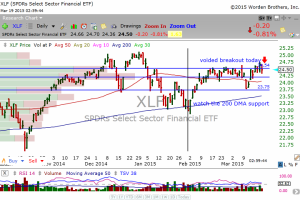 Banks (KBE) fell 1% on the day with some banks breaking support and pattern setups. As you can see on the chart below the reversal negated the break to a new high. The uptrend  line will come into play if this continues to unfold. Equally important from my view is to ask: will the broad markets move higher going forward without financials as a leader? Does this sector need to be a part of the move overall? For now my view is the sector may revert to the sideways trading it has experienced most of the year and if that unfolds how does it impact the broad indexes? Only six stocks of the 85 in the financial ETF closed in the green on the day… that is selling pressure. Whatever happens going forward this has now become a new worry to add to the list. The rally in the sector was based on higher rates on the horizon helping the bottom line for the banks and regional banks sustain new upside growth potential going forward. Now we watch and see. 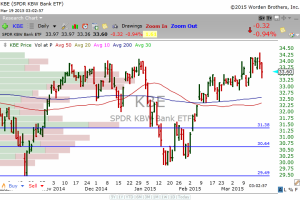 Speaking of financials, Bank of America (BAC) took an additional bump from the ruling by the SEC to allow for a a vote by shareholders to form a plan to break the bank up. This is part of a consumer-advocacy group Public Citizen. The bank would be forced to ask the independent directors to devise a plan to divest itself of everything except the banks core business. Without getting into all the details this action allowed by the SEC is the first ever to permit such a vote to hit the ballot at an annual shareholders meeting. Some believe this is the working of the government to force the break up of the large banks, and others believe this is a key reason not to be a publicly traded company. As Ross Perot was famous for saying, “the devil is in the details!” This is one case where that is very true. Be careful what you wish for… it may not turn out as you expect. I hit my stops on BAC today as a result, and for now we will gladly sit back and watch as this train wreck develops in slow motion. It will be of interest to see if the short positions grow in the bank. 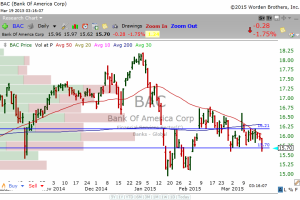 The point I made last night relative to the ripple effect of the Fed’s decisions are unfolding. The whole story without all the emotions attached will take some time to unfold… you know what I am going to say… and we have to practice patience. We can speculate with the rest of the investment crowd or we can plan. In the video update on Wednesday I laid out the key sectors to watch going forward. The dollar (UUP), bounced today. The bond yields (TNX & TYX) rose slightly today. Commodities i.e. crude oil (USO) fell today on supply worries… imagine that. Utilities (XLU) gave up gains today. REITs held steady today. Large caps (SPY) gave up some gains today. In total the initial response from the Fed’s decision was balanced by today’s action. In it’s entirety the markets were mixed on the day, and it some ways that was expect, with the reality of what transpired from the Fed on Wednesday creating some short term uncertainty after everyone had a chance to think through the ramifications. One day at a time is the mantra once again.