Crowdfunding to solve the debt payment due next Tuesday from Greece to the IMF? This just gets better and better. The have raised 254,000 euros thus far… who knows maybe they will make it to the 1.6 billion euros needed over the next week. Puerto Rico is broke due to pension obligations and is asking to file for bankruptcy, Chicago just borrowed $1 billion to meet teachers pension obligations, and the list of debt exposure continues to rise. There are too many uncertain issues facing the world economies to gain any confidence or traction in the equity markets. I don’t want to act like no one knew this was coming, but the ostrich approach (head in the sand) to these rising debt obligations is still facing the granddaddy of them all… social security. But, in the face of it all… the politicians keep paying debt with debt thinking they can work their way out of debt! Similar to person on the phone asking, “what do you mean I can’t pay my MasterCard with my Visa card?” Makes perfect sense, right?

The broad markets attempted to put on a happy face at the open this morning with the buyers willing to step in and buy the dip. I will give applause for a valiant effort, but in the end the worries remain in place and the sellers have not gone away yet. The NASDAQ and the Russell 2000 Small Cap indexes were the upside leaders on the day, but neither reversed the negative impact of the selling from Monday. Worries are still in play as the second quarter officially comes to an end. The chart below is the Dow Jones Industrial Average which closes with a decline of 1.3% for the first half of the year. Not exactly how many had drawn up the year to perform. The chart also shows the distinct trading range the index has been in since the first of the year. That is the impact of uncertainty or lack of clarity looking forward. The NASDAQ index on the other hand did gain 5.4% through the first six months and the S&P 500 index was up 0.3%. Tough sledding thus far, and the outlook isn’t much better for the second half of the year. 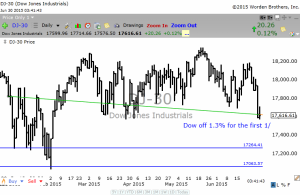 Tomorrow we start to look at the economic data for the month of June with the ISM manufacturing data and then plenty more to follow the balance of the week. We can’t forget earnings will start next week and then the parade of data points for the second quarter comparisons to the first quarter, and, and, and… It needs to show some improvements or it will only add to the doubts already in place from the first quarter. The negative side of the street is still talking major correction. The optimist side of the street wants to believe none of the evil being pontificated about the economic picture is true. They want us all to be happy and buy stocks regardless of valuations. The second half of the year promises nothing more than to keep it interesting in the markets overall.

Breaking down the sectors it was the previous leaders attempting to bounce back. Financials, healthcare, consumer discretionary and energy led the charge on the day, but didn’t quite mount that optimism that would inspire investors to put money to work based on opportunity. Plenty of room for optimism, but little to show in terms of conviction.

Yields on treasury bonds rose today showing some the rotation from fear evaporating. The VIX index fell back to 18.3 and the dollar rose slightly on the day. Oil prices were higher as well. The point being that some of the negative sentiment from Monday shifted to cooler heads prevailing… at least for the day. I am still willing to take this one day at a time and let it unfold relative to the facts versus the fiction/speculation.  Stops in place and all eyes on the prize as we begin a new quarter.