The market overcomes another day of early selling with the difference today of breaking higher in the end. The Russell 2000 index jumped 2% to lead the sectors, but it was lagging and had been testing the recent move higher by the other indexes. This move puts the growth back in play along with another leg higher for the broad markets. The jobs report tomorrow will be the next catalyst to the move. If the news is good higher we go.

Are we not expecting a big rally in the major indexes? According to the buyers the answer is yes! I am not going to argue with any of the thinking people are pontificating about the upside as the trend is engage and despite the treats to break lower the indexes have still not done so. The look of the charts are overextended, but arguing with the picture is the same as arguing with a stop sign… doesn’t change anything other than your blood pressure.

The rally cry today came from the European Central Bank and the announced interest rate cuts. How did the world markets respond to the ECB? With a rally in stocks. The addition of charging banks to park money with them versus the banks receiving interest is the first in the world banking systems. The only thing he did not implement today was Quantitative Easing… see the US Federal Reserve for what that means. IEV was up 0.8% in response to the news.

Tomorrow is the jobs report and it will set the stage for trading in the US. The expectations are high as the general consensus remains that the economy is stronger than many believe. 210,000 new jobs are expected to have been added in May. As usual the devil will be in the details.

Stay tune tomorrow promises to make this all interesting.

The NASDAQ 100 index (QQQ) is back to the leadership roll that started this push to the upside on May 15th. Posting a solid gain of 0.8% today the ETF closed above the $91.34 level of resistance. The chart below does a better job than I can explain of the reversal on April 11th to the new high today. 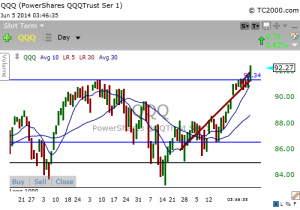 The banks made solid move Monday despite the ISM manufacturing data and made a break through resistance on Tuesday to set the pace off the low and break the short term downtrend. Worth watching to see how the banks play out from here short term. The chart below shows the solid move and follow through on Thursday. 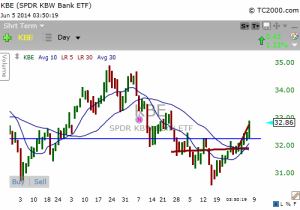 Treasury yields have been rising the last two days, but held during the trading day today. The chart below shows the reversal in TLT the last week as a result of the selling. Is this in response to the positive (better than expected) economic data of late? Or, is this about the ECB cutting rates while the US market is looking raising rates? Worth our attention as money looks to be exiting the bonds. This may be fast money chasing the next big thing. $111.20 exit point for TLT if the yields start to rise. 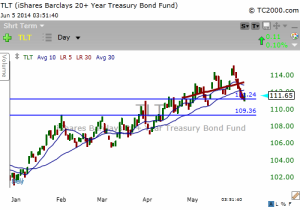 Plenty of moves on the upside Thursday and the markets are poised to solidify the next leg higher for the buyers. We have to exercise patience on both the buy and sell side of this market. The upside is in play, but the worry is rising as the market gets more overextended.