Another rally for the broad markets as the S&P 500 index and the Dow both set new highs again. The release of the Fed minutes was moved to 9 am and the same language and promise of stimulus helped keep the upside momentum in stocks today.

The activity today was one of higher at the open and closed near the high of the day. This was the best trading day in some time from my view of the activity. The gains in the laggard sectors helped push the market higher overall. Still below average volume, but the bounce is in play and that is what we are trading for now. Watch the earnings news and any potential swings to the downside. Friday is setting up as a big day with the banks setting the earnings pace and retail sales reports for March. Same store sales in the morning as well.

Meaningless data today as everyone awaits the FOMC minutes tomorrow. Hopefully not big surprises relative to when the Fed will stop the QE bleeding.  March Sales Report on Friday morning and plenty of earnings the balance of the week.

The back and forth of the indexes continue as investors worry about the data, but they are still willing to buy on the dip for now. Taking it one day at a time with our stops in place.

Downside Pressure – All but gone on Tuesday as the upside rebound gains some momentum relative to price.

Volatility index – (4/5 post) – With a jump back above the 15 level last week, the anxiety picked up from the jobs report. However, in the end the issue was set aside and the index fell back to the 14 level at the close as if nothing happened on Friday. This week it has continued the retreat back towards the previous lows. No sign of anxiety now.

The February 25th low pivot point remains in play. We added the March 14th high as the next potential pivot point on the downside, but the market has continued sideways more than down. The move last week pulled the index back below the close on the 14th keeping the upside in play. Healthcare (XLV) remains the leaders off this low. Consumer Discretionary (XLY),  Utilties (XLU) and Consumer Staples (XLP) were on a positive trek to the upside, but we have to watch for the shift currently. Financials (XLF), Telecom (IYZ) and Technology (XLK) add to the upside momentum. Stay focused and protect the downside risk. 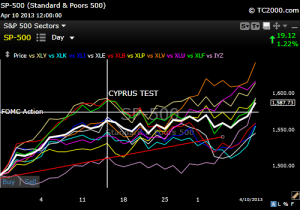 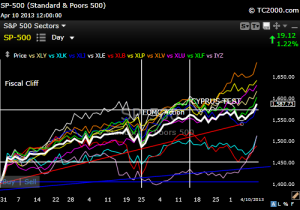 4/10 post – November 15th Pivot Point is the start of the current uptrend. Target 1550-1575 was attained and now there is pressure to test the move. The trend has overcome two attempted moves lower to maintain the uptrend. The move on Wednesday now makes it three attempts to break lower. Telecom and Technology are both making moves within the trend and showing some rotation in the short term leadership. Watch the trendline as the support on the current pullback. 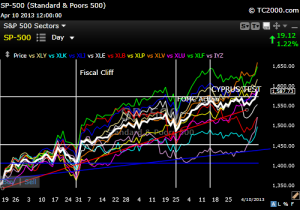 Financials – (4/3 post) – Banks are rolling over. The chart of KBE shows the current pullback breaking support at $26.50 and moving below the 50 DMA. This has impacted the financials overall as XLF moves lower. The weakness however, is owned by the banks. The regional banks (KRE) have joined in on the downside now which adds to the downside pressure. Thursday XLF bounced back to $18 and we have to watch to see if it can recover the previous uptrend. Need to push back above $18 .05 resistance now.

post 4/8 – made move through resistance on both XLF and KBE – added the positions to the model today.

post 4/8 – rallied with crude moving higher and the broad market indexes. Watch and manage the stop on the play.

post 4/8 – sold lower at the open and struggled most of the day until a last minute rally back to positive territory for the broad index. Still have to be cautious and manage the downside risk.

4/5 post – Gapped open and we passed to start the trading day. Still interested, but pushing lower following the open. Watch for the entry level to be hit on the upside again for a clear entry point.

4/8 post – follow through rally on the upside from the Friday intraday bounce relative to the opening sell off. Upside bounce looks to be in play short term.

Midcap – (4/2 post) – IJH moved to a new high on a solid break higher last week. The move on Tuesday was not as poor as the small caps, but Wednesday it joined the party down 1.1%. Watch the downside risk short term, but I am more interested in a bounce play versus the short side. (4/5 post) – Tested the $110.30 support level on Friday and bounce back near the 50 DMA. Still looking for a bounce play short term.

4/8 Post – followed through on the upside and hit the entry as posted on the watch list of the sector rotation model.

Telecom – (4/4 post) – What is up with Telecom? The sector has been awful over the last four months. Every attempt to break higher has been met with selling. The last two weeks it is acting as if it really wants to move higher? IYZ moved back above the $24.40 breakout level we have been watching from the current trading range. We added it to the S&P 500 Model and it has been moving sideways essentially, but now we are looking for a boost to the upside.

post 4/8 – Solid gain of 1.3% on Monday. This is a follow through to the boost on Friday above the trading range highs. S&P 500 model owns the position short term.

You have to be ready for some downside if the sellers again attempt to take control of the trend.

These are just some trading opportunities that are evolving as insurance against the portfolio. Not predicting a major downside turn, just some trades that look interesting as they develop.

Treasury Bonds – Yields on the 30 year Treasury fell to 2.86% the lowest level of the year. Stocks did reverse and go higher following the worries that prompted the rise in yields. The money flow has shifted away from bonds and back towards stocks. However, considering the roller coaster ride this has been you have to keep your eyes wide open and take advantage of the trading opportunities versus buy and hold.

post 4/8 – Take the exit from TLT tomorrow if the yields continue to climb. 4/9 took the exit on the bond.

Corporate Bonds – LQD = 3.8% yield.  The jump higher was in response to the rotation of assets towards safety or defensive to the stock market. This is not likely a new trend for the bond, but we will take what the market gives. Use stop at the $120.50 level to protect the upside gains.

Natural gas still leading despite the test of the upside. Watch for possible move higher in gasoline. 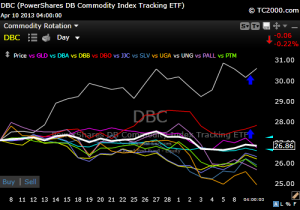 4/10 post – Global markets tested lower on the news in Europe and continue to trade sideways. The last two trading days we have seen some renewed moves to the upside showing up in the overall index, but also some interesting country charts as well. I have added those below with new comments.  The graph below has a starting point of the last low… still looking for a bounce higher short term. Mexico (EWW) has taken the leadership role currently.  Japan (EWJ) had moved higher as well showing solid leadership currently. EWZ, IEV and FXI have made a push to the upside as well. 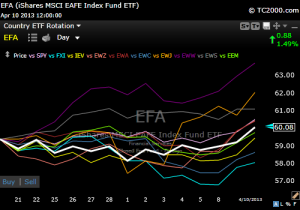 Real Estate Index (REITS) – IYR broke through the trading range near the high of $68.50-69.50 and continues to climb to new highs. Sector Rotation Model  The Sector is getting positive press on the creation of REITs to absorb the excess housing defaults from banks and Fannie Mae. The risk still has to be managed despite what anyone thinks day to day.

(4/4 post) – Real Estate REITs have been working higher, but the international REITs are looking even better in some ways short term. RWX broke to a new high on Thursday and remains positive.

Less volatility on Tuesday compared to Monday, but there are still issues facing the markets as inv[...]