Speculation and prognostications continued today relative to the government shutdown. I would love to make up my story of what if…. but the reality is no way of knowing until we have more data. The good news today was don’t worry, it will all be okay, and the challenges will all take care of themselves. Sounds like good advice.  There is no deal anywhere in sight according to the media headlines. That is true again today, but we will have to see how it all unfolds going forward. We know today that all the sellers and speculators of doom were chased away and the buyers stepped in to take advantage of they perceive to be values. Not taking sides only watching for now… one day at a time.

The major indexes all posted positive days taking some of the bite out of the downside that has been in play since the September 18th high following the FOMC announcement. The Dow held the low posted on Monday, the NASDAQ reversed off the 20 DMA on Monday and followed through today to a new high at 3817. The S&P 500 index was not quite as robust on the day closing at 1695 after holding at the 50 DMA. The small caps (Russell 2000) hit a new higher and IWM broke above the resistance at $107.50. This solidifies the leadership we were looking for from the sector.  Healthcare was up 1.2%, Telecom gained 1.1% and Consumer Services were up 0.9%. Positive day, but still plenty to prove going forward.

Stock of the Day: NetFlix (NFLX)
Up five percent today gaining $15.41 to close at $324.62, a new high by the way. The three weeks of consolidation near the high found the buyers step in and take the company higher. The stock is up 246% for the year and continues to prove the doubters wrong. However, at 206 times forward earnings it does seem expensive fundamentally. If you own it hold it, if you want to buy it look for what may be a reasonable test or entry point. Chasing stocks never seems to end well. Targets for the stock are at $370 per share by MKM Partners.

Quick update on Monday’s post…. IHI, iShares Medical Devices ETF – Continued higher on Tuesday adding 0.7% and confirming the move. The headlines are full of conversation about the republican budget wanting to the cut the taxes on medical devices as part of the budget approval. That sent the ETF up 0.5% on Monday. Not much, but it showed a positive side while the bulk market spent the day in the red. I like the sector and continue to track the opportunity to buy into the selling.

Trend Talk of the Day: Dow Jones Industrial Average
Monday’s post — The uptrend in the Dow remains in play, but the big swings up and down also remain in play with another leading day on the downside for the index. The Dow is now off 3.5% since hitting the high on September 18th. It has moved below the 50 DMA and to the next level of support at 15,090. Another day like Monday and the index will test the infamous 15,000 mark. I am watching the short term trendline which started on the higher low in April. 14,840 would threaten the trendline on the downside. This is the leading seller among the major indexes and the one we are watching relative to the trend and support. Watch and see how this unfolds going forward.

Tuesday’s post – I wanted to update this trend as it is getting interesting. I am making it the Chart of the Day as well. See  below. The test of support at 15,100 is key as it did hold, but today was an inside trading day. (the bar on Tuesday was inside the bar from Monday.) This could set up a reversal off support and it worth watching going forward. The key is the trend which remain on the upside is still the bias and bodes well for the bounce to take place. As you know, outside market events like the budget shut down of the government can play havoc on the opportunity. Watch, plan and trade. 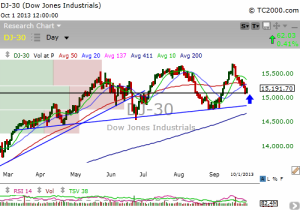 Economic Data:
Still plenty of questions on if the data due out this week will be published on time. ISM Manufacturing was released and it was better than expected at 56.2% and hitting a two year high. 55% was the expected report showing the continued improvement in the manufacturing space. Marktt PMI was unchanged at 52.8%. Vehicle sales were lower at 15.3 million versus the 15.5 million expected and 16.1 million in August. The construction spending report was delayed and tomorrow we have the ADP Employment data. So far the improvement over August looks to be on the right track.

We have discussed the need to deal with the choppy markets and keep you emotions in check. Let the trades set up and never assume anything! Let the charts validate and confirm the trades before you put your money at risk. Be sure to follow along with the Pattern Trades posted each morning along with the Research notes. These are a great tutorial and practice for learning to deal with the trading process. Entry, Target and Stops.