Do we sell the bounce or buy the rally? Confused? Don’t be. The headlines are full of arguments about the current move off the April 11th low. I have separated them into two camps, the first, buy the rally, are those who are pontificating this is a continuation of the uptrend off the 2009 low and there is still plenty of upside left for investors to enjoy. It is an argument that is being validated each day for the last six as the move higher continues to push towards the April 2nd high of 1890 on the S&P 500 index. Establishing a new high for the S&P 500 index would go a long way to substantiate this belief. This camp also believes that what caused the drop to 1814 was the fear of the Federal Reserve hiking interest rates sooner rather than later. The fear was prompted or based on the stimulus cuts relative to eliminating the $85 billion per month of quantitative easing. The belief is that cause has been erased by the retraction of comments by Fed Chair Yellen last week. Thus, all things are good and no rate hikes by the Fed now believed to happen until 2016, according to this camp. All is good and the rally should continue or be restored with the establishment of a new high. This could very well take place, but it will take time and that is where the current challenge lies for me.

The second camp, sell the bounce! They believe the cause of selling on April 2nd was also on fear the Fed would hike rates sooner than later, but they go further in their belief that the economy is not strong enough to handle a rate hike nor the cuts in the $85 billion of quantitative easing. Simply put, their belief is the economy isn’t strong enough to justify current prices even if the current stimulus remains in place. They also believe the Fed should do more along with the Federal government to stimulate growth. The examples of the current fact about earnings are used as further evidence of the weakness in the economic outlook. Of companies reporting earnings currently two-thirds have missed top-line revenue numbers, and only half have beat estimates. The last three quarters have see a steady decline in both earnings and revenue growth. The list is too long to address on this matter, but it a sufficient argument when investigated. Of course they believe a good small business tax break would cure most of what is hurting growth, at least that is what they say. Because of this bases for the their beliefs, selling this bounce/rally would be the prudent move to make as the market is headed for a significant correction.

Therefore, investors are feeling pressure to make a decision or response to one camp or another. In reality the only thing that matters is what you believe to be true, and managing the risk of your belief as the future unfolds. Time frame is the one piece of the puzzle that tends to get lost from all the comments relative to market direction. What is the time horizon of the above espoused beliefs? Does the 70 point or 4% decline from April 2nd through 11th matter to the longer term views? Today, April 22nd, only 7 points from being back the April 2nd high close, NO! Did it matter on April 11th? YES, but only if the S&P 500 index continue to move lower and break the 1790 support level. As that didn’t happen you would have taken a wait and see approach and you would be perfectly content today. BUT… that doesn’t settle the argument being weighed in the headlines as to sell the bounce or buy the rally.

Since I am neutral to this argument currently, I will say, both can be right in time. First the index needs to eclipse the closing high of 1890 and establish a new high. But, it will also need to follow through on the upside and maintain the uptrend line from the November 2012 starting point. That will take some renewed momentum from investors and traders. The present move is a good start, but there is still plenty of work to do for this task to be accomplished moving forward. Likewise, the downside view needs the index to fail on the current advance, retrace it’s steps and break the November 2012 trendline on the downside and break below the 1790 support level. With the current bounce it would take a reversal in sentiment from investors short term. Thus, either argument can still play out it is just being patient enough to let it unfold.

The chart below shows the key levels currently in play. The up trendline and the resistance at 1890. Time will tell, but for now the momentum is with the upside, but it also has had the benefit of six up days without a test. Patience is the best course of action currently and let this unfold as we all gain clarity in both direction and momentum for the broad market indexes. 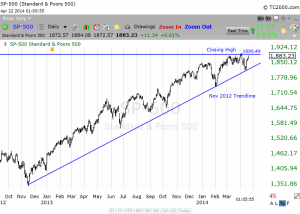