How many ways can we talk about the ramifications of the budget shut down of the government. Evidently as many as there are reports to write about it. There is no deal anywhere in sight according to the media headlines. That may be true today, but we will have to see how it all unfolds tomorrow and going forward. The outcome is where the speculation comes in to play and how long it lasts is the other key variable. I don’t want to add wood to the fire, but this is why we say know where the exits are before trading starts.

The major indexes all tested lower on the day with the NASDAQ holding up the best. From my view it could have been a lot worse. Tomorrow it will be if we don’g find some short term solution. The big challenge is being short and holding overnight as the deal could be struck at anytime and that would create a whole different outcome for investors. Thus, we will take the road of caution and work to protect my principle and then take positions as the opportunities present themselves. One day at a time.

Stock of the Day: IHI, iShares Medical Devices ETF
The headlines are full of conversation about the republican budget wanting to the cut the taxes on medical devices as part of the budget approval. That sent the ETF up 0.5% on the day. Not much, but it showed a positive side while the bulk market spent the day in the red. The healthcare sector overall closed lower and continues to struggle with the media attention being given the healthcare reform (i.e. Obamacare). I like the sector and continue to track the opportunity to buy into the selling once this all get clarified and blessed by Washington.

Trend Talk of the Day: Dow Jones Industrial Average
The uptrend in the Dow remains in play, but the big swings up and down also remain in play with another leading day on the downside for the index. The Dow is now off 3.5% since hitting the high on September 18th. It has moved below the 50 DMA and to the next level of support at 15,090. Another day like Monday and the index will test the infamous 15,000 mark. I am watching the short term trendline which started on the higher low in April. 14,840 would threaten the trendline on the downside. This is the leading seller among the major indexes and the one we are watching relative to the trend and support. Watch and see how this unfolds going forward.

Economic Data:
Now the question is will we get the economic reports due out this week if the government shuts down? We will have to wait and see. The significance of the data will diminish if the shut down runs too long. The shut down will become the disaster of choice to occupy the investor, speculator and media’s immediate space. More on this tomorrow.

Chart of the Day: iPath S&P 500 VIX Short-Term Futures (VXX)
The threat or reality of a government shut down has sparked the upside in the Volatility Index (VIX). That put VXX in play as well with the move off the recent lows. We have been tracking this opportunity since the FOMC meeting and looking for a catalyst to push the index higher and stocks lower. Leave it to the government to do what Wall Street could not… produce a pullback or test of the current trend. There is still plenty of upside in the chart if the struggle to pass a budget as well as the debt ceiling over the next couple of weeks. 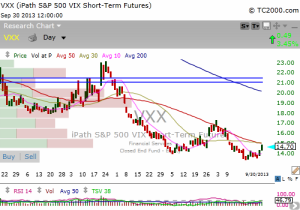 Choppy Markets Require Patience
In my last post I state that the market has been testing lower for the last week and that should put us on guard relative to our short term or trade positions. The selling accelerates further on the downside Monday with the threat of a government shutdown. Even with the bad news on Monday hanging over the broad markets there were still bright spots throughout the day based on the speculation of it all getting resolved. Thus,  the lack of clarity in the markets currently it is causing or creating a choppy trading environment. That is where we have to exercise discipline and sit it out if necessary. There are no trading rules that state we always have to be trading. Sometimes the best trade is no trade. The downside is building momentum and the short term anxiety is causing some volatility (see chart above).