Another positive day with the broad indexes posting gains for the fourth day out of five. The scatter graph below shows the ten sectors of the S&P 500 index measured against the index itself (white line). When the market bounced last Friday off the last low it created a new pivot point and thus we would like to see the leadership. You don’t have to look very hard to see the move in healthcare (XLV) is driving the index higher. Biotech (IBB & XBI) are driving the sector over the last two trading days. Industrials (XLI) (blue line) isn’t far behind as is consumer services (XLY). The surprise move is from utilities (XLU) which has benefited from the decline in interest rates and the rise in bond prices. (see below) The laggards have been the usual suspects of consumer staples (XLP), financials (XLF), basic materials (XLB) and telecom (IYZ). The surprise is energy (XLE) leading the downside. The commodity prices declining on a stronger dollar have contributed to the move lower. All said, follow the leaders and take what the market has to give. 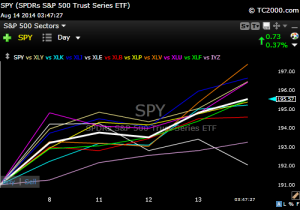 The worries have not disappeared they are just on the sidelines for now. The move higher on the day was not earth shattering with modest gains of 0.35% and the volume was the lowest of the week. The sellers are still around and don’t be lulled into believing they have given up. A catalyst is all they need and that is where having a willingness to accept the risk of the environment comes into play. Caution is advised and tight stops a must.

On Wednesday natural gas fell more than 3% and negated the bottom reversal… I noted that inventory data may change that and that is what transpired today. That does not make me smart just observant. The 2% gain today did not change much as the bottom or base is still being built and we will see if this presents and opportunity going forward. FCG the natural gas stocks ETF fell 1% on the day in sympathy with the energy sector. This may be something to watch as well, especially if the commodity continues to move higher.

Treasury bonds moved higher on the day with TLT hitting a new 12 month high. Since January the bond ETF has gained 14.2%… not shabby at all. The issue is that bond prices were supposed to decline according to analyst. The Fed cutting stimulus and the renewed vision of interest rates ticking up in the first quarter of next year would provide the catalyst… that has not occurred and may not any time soon. The bidders offered to buy 2.6 times the amount of bonds offered today at the auction with a yield of 3.22%. The demand is strong and the statistic shows supply is low… thus higher prices on bonds. Who is buying? Just about everyone and that is putting pressure on the on bond yields to decline. So much for analyst projections this year.

Crude continued to decline today after bouncing late on Wednesday in response to the supply data. Why the reversal today? Europe is my rationale. The German bond fell to 1% on the 10-year bond, (that influenced the US treasury bond as well.) and that is putting pressure on the economic picture, which in turn makes the projections for oil demand decline. The 2% decline put the price near the $95.60 level and support on the downside is $95.10. The break lower could put further pressure on the commodity. DTO is the short ETF trade for crude and cleared the $32.85 resistance on the move today.

Bottom line… one day at a time. The opportunities are unfolding we just have to be willing to take the risk necessary to capitalize on the moves.