Another day of watching paint dry! The major indexes held on to very small gains, but the media made it sound like a big accomplishment. Whatever, the bottom line is another day of treading water and waiting to see what direction the markets will take looking forward. Scanning for rotation we continue to see developments on the upside along with some warnings.

The fun for the trading week continues as the major indexes find a way to attract more buyers on each draft lower.  We have updated the research to reflect today’s activity.

February retail sales data was better than expected, but the consumer sectors were up slightly on the day. No reaction from investors as they seemed to discount the news. We keep watching the data nonetheless.

Sales lifted the dollar back near the current highs and push hurt oil prices which ended lower on the day.

Import prices rose 1.1% and inventories up 1%. Both were brushed over, but there are some concern short term.

S&P 500 Index close up barely along with the NASDAQ and the Dow.

The February 25th low pivot point remains in play this week. The chart below shows the leadership from XLY & XLF accelerating to lead the move. XLB became the leader on the test in XLF and XLY today. XLV, healthcare pushed higher along with energy (XLE) on the day. IYZ, telecom finally resumed some upside movement on the day to help keep the uptrend in play. Not enough on the downside to raise unjust concerns, but we have to manage the risk should the selling gain any traction near term. 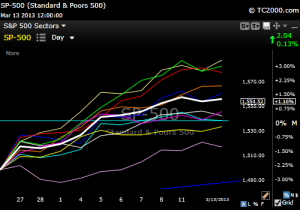 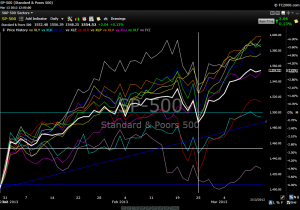 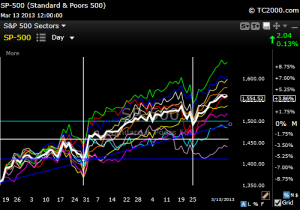 Financials – Banks have been leading the upside as the stress test is passed with the next test coming later this week on the Fed allowing dividends and stock buyback programs to those whose balance sheets qualified. Watching how this plays out going forward.

Energy – The sector bounced off the low and is testing the February highs. The stronger dollar has been the biggest detractor to the sector overall. Now inventory data is showing a record build up, raising questions. Despite all the bad implications XLE is making the move higher. Watch how it plays out.

Treasury Bonds – The downside pressure on bond prices eased some on Tuesday in the Treasury market. Watch and protect on the downside. Estimates are for 2.75% on the 10 year bond by year end? That is something to watch and play PST on the short side.

Municipal Bonds – MUB = 2.8% tax-free yield. The price of the bonds broke the support at $111.30 mark week and the selling continued Monday. The move on Tuesday held its own, but this is a sector of the bond market to avoid for now. 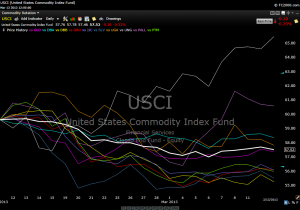