Did the comments from the Leaders in the House, Senate and White House finally have an impact on the markets psyche? The futures were down slightly heading into trading, but once the opening bell rang the sellers took control and the downside was in full bloom. The initial selling accelerated and at lunch found support near the 1670 level on the S&P 500 and attempted to bounce the balance of the day. “I will not negotiate!”  until they (Congress) pass a budget and raise the debt ceiling. The first couple of times that promise worked, this time however, the Congress isn’t falling for it again. Besides what motivation do you have to negotiate once you get what you want? Thus, the market reacted this morning with some selling that was more than on the previous days and therein lies the greater challenge, no solution being discussed that has hopes of putting a budget in place or dealing with the debt ceiling. Until progress is made towards some resolution the market will only grow in volatility. Watch, be patient and look for the opportunity.

State of the Market:
The major indexes played rollover today. Starting with the weakest index, the Dow broke below the support at 15,100 and closed below 15,000. This is still the leader on the downside and the one to watch as we stated the last two weeks. Unfortunately the story it is telling isn’t one we want to hear. The trendline is coming into play and a break below that would set up an even uglier picture. 14,775 is the previous low from August and the level to watch for now. Stochastic is pointing to ‘oversold’ (hate that term), but it is still to early to say this is a buying opportunity. The pressure is being put on the market by an outside event, the budget and debt ceiling, thus applying technical data relative to momentum isn’t going to result in the most accurate indication (my view). However, DXD has played out nicely in our pattern trade picks.

The NASDAQ moved to a new high at 3817 on Tuesday, tested the move lower and has not only managed to cross below the 10 DMA. This is still the leader along with the Russell 2000 Small Cap index. If they break support near term they will confirm what is happening in the Dow and S&P 500 index. The S&P 500 index has moved below the 50 DMA and tested the next key support level at 1670 today. The uptrend line is coming into play and a break would only validate further the downside move. Is it time to be short the market? My inbox today was full with that being the primary question, but we don’t have anything definitive longer term, but the short term has seen several setups for trades, i.e. the Dow and the S&P 500 index into the close today. Dangerous trades they are, as it is news driven and not fundamental. It is too easy to focus on the noise in trading and get hurt following the crowd.

Looking at our sector rotation chart below with the September 18th pivot point, the sectors were trading in step with the index. Utilities, Industrials and Consumer Services outpaced the index on the downside Thursday. The VIX index jumped above the 17.8 level in August and closed at 17.6 on the day. Welcome to trading in an uncertain environment. If the children in Washington (insult to children I know) don’t resolve this issue of the budget soon the high from June at 21.7 on the VIX will come into play. 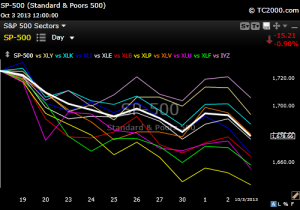 Stock of the Day: Citrix – down 2.7% and confirmed the break of support at $70. It did manage to hold the 200 DMA and that is the level we should be watching short term. If it holds this level technically that is a positive and could set up a bounce move. If it doesn’t hold the downside is in play and the short side will offer a trade opportunity. Fundamentally the stock is not in bad shape and the software/cloud computing space it occupies is still in a solid uptrend. One to put on your watch list to see how it plays out.

The lows established last week gave way to this weeks rise in volatility. The move above $14 has been interesting short term as a trade opportunity, but a move above the 50 DMA and $15 mark would show uncertainty building in the S&P 500 index, and that is not good news for stocks. Watch to see how the volatility of the market index plays out short term.

On Thursday we did follow through and move above the $15 level on VXX. The uncertainty is in play and that is impacting the broad S&P 500 index negatively as it failed to hold the 50 DMA today. 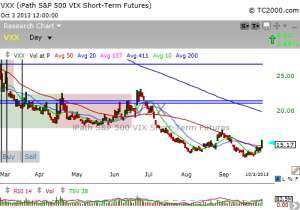 Economic Data:  Not as positive with the ISM Services number dropping to 54.4% versus the 57.5% expected. The news didn’t help the broad markets overcome their fear factor concerning the shutdown and budget impasse. Factory orders were delayed and the jobless claims were 308,000 up 1,000 from last week. Yesterday the ADP jobs report did not help as the numbers were below expectations and the August data was revised lower. The private sector is slowing again in the addition of jobs. The blame game for this continues to be a hot news item. Tuesday the ISM Manufacturing was released and it was better than expected at 56.2% and hitting a two year high. 55% was the expected report showing the continued improvement in the manufacturing space. As it has been for the last year, the mixed results continue in the economy.

We have discussed the need to respect and manage the risk of the choppy markets and keep you emotions in check. Let your trades set up and never assume anything. Monitor your stops to protect the principle and stay focused on your discipline! Let the charts validate and confirm the trades before you put your money at risk.

As always there is plenty to watch and trends to follow. Keep you eyes open, your ears tuned and your stops in place, they will keep your crying on days like today.