What happened to the good mood investors were in yesterday? It is call the FOMC minutes! Just because they made some simple comments about the economy not changing despite the billions and trillions of dollars being pumped into the system. That news was a little unsettling it trumped the optimism over M&A activity. Why does this bother investors now? This is not new news by any stretch of the imagination. It just happen to rock the boat today. This puts us on guard going forward and we are raising stops to account for this move and we will determine how to deal with the outcome.

Apple fell 2.4% on the day and that sent the NASDAQ lower as well. Of course there were others adding to the downside, but the impact of Apple is significant as it has now spent the last six days retracing the bounce off the lows. There were plenty of big drops with 38 of the 100 hundred stocks dropping more than 2% on the day.

The uptrend remains intact, but the test is on… Watch, Manage and Act.

Economic data remained on the disappointing side today. The housing starts adds to the builders index on Tuesday. That sent the homebuilders ETF, XBH down 4.5% on the day one sector to watch on the downside short term.

The FOMC minutes was the most fun on the day as the disagreement among the Fed Presidents was evident in the notes. The general idea is they think the Fed should slow or stop the rate of purchases of Treasury and mortgage backed securities. That was a shock to the market and the selling ensued. If you take away the punch bowl the party will stock quick enough. The next meeting is March 20th and there will be plenty of discussion on alternative methods to handle the existing problem. This has to be watched going forward for the simple reason it will impact the markets overall. 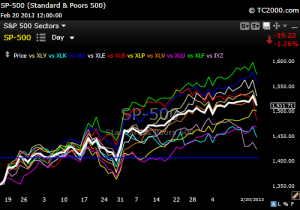 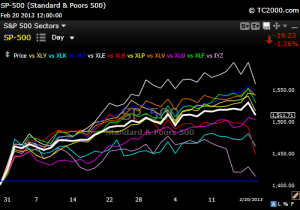 Telecom – iShares Telecom ETF (IYZ) fell week on news the news from Century Link (CTL) to provide the downside leadership for the sector. They cut their dividend 25% and the sellers took over. The test of support at $24.10 is what I am watching now? Closed at $24.08 on Wednesday? Downside risk in play short term.

Alternative Energy – TAN has been moving to the upside as the sector sees solar companies gaining traction. I am not a fan of the ETF as the exposure to China is too high for my taste. However, the two leaders here are WFR and FSLR. I like the idea of a longer term position with some money management around the positions. Big pullback on Wednesday is worth our attention going forward.

Financials – XLF continues to move to the upside short term. The downside today pushed the sector lower, but still one to watch longer term. Adjust your stops and manage the risk of any positions near term.

US Dollar – The close $22.13  (UUP) and broke above the $22.05 entry point on the day. Dollar index traded higher on the open on Wednesday. Watch the dollar/euro trade short term.

Japanese Yen – Has the yen found the near term low… yet? FXY is testing lower as investors still believe the devaluation will continue.

Treasury Bonds – The current play is short with TBT in the model currently to take advantage of the move lower in prices. The last week the fund has bottomed and started to consolidate. The retest of the lows is a bad sign if it breaks down. Hold TBT for now. Watching TLT for a potential play.

High Yield Bonds – HYG = 6.55% yield. Support is at $92.75, which has held short term and the fund moving off the lows for now. We will watch to see if support holds and then make a determination on the upside play if it evolves.

Corporate Bonds – LQD = 3.8% yield. The price has found short term support ($118.90). Now watching to see if any upside opportunity exist in the bond. The current activity says no, but still holding support.

BAL – Cotton jumped in mid January nearly 10%, but has stalled since. A trading range of $52.80-54.40 is in play. A break higher would be a continuation of the move off the November lows. One reason for the jump is rising demand from China? They are importing more than analyst expected and that provided the initial bump. Now we look to see if it a true increase going forward. Nice break higher today.

KOL – Coal ETF caught support at the trendline (ascending triangle) and moving back towards resistance at the $26 level. Big flip lower on the shift in sentiment towards markets. Watch.

GSG –  Big reversal in commodities overall and the chart shows the selling on Wednesday. Watch support at the $33.50 level.

OIL – Crude is tested support and bounced as the chart shows short term volatility. Manage the position, but let it have some room to move as volatility has picked up? Manage your stop on OIL at $22.40. HIT EXIT POINTS ON SUPPORT BREAK ON WEDNESDAY.

GLD – Downside follow through on Friday with drop of more than 2% on the metal. This is the accelerated selling we discussed and we will monitor to see how low it will fall. Big follow through on Wednesday and the 2.5% decline puts the negative sentiment in control of the metal.

The world’s central banks bought 534.6 tons of gold in 2012, an increase of 17% over 2011. That was the most since 1964, and it makes the central banks net buyers of gold versus sellers. Despite this fact the price of gold rose only 4% on the year, but saw price swings of more than $200 per ounce. The overall demand fell and that has put pressure on the price of gold currently.

DBB – Base Metals need to clear the $19.70 as they attempted, but failed miserably Tuesday.  Watch for the short term reversal. No reversal on Wednesday, but more downside as dropped 1.1%.

PALL – Palladium tested $73.60 on some selling last week. The upside is still in play as well as the uptrend. Adjust your stop accordingly and let it continue to run. Traded lower on gold falling protect your gains short term.

PPLT – Platinum tested lower and is filling the gap left behind on the move to new high. Traded lower in sympathy with gold. Watch the downside risk short term. broke $163 support.

EFA – Dropped last week on Spain and is still testing as the euro-zone GDP data disappointed. The support levels are key and it is holding above the first level at $58.15.

IEV – Dropped last week on Spain’s sovereign debt concerns. Testing the first level of support at $40.  Euro-zone GDP data on Thursday didn’t help the situation. My upside target remains $45.50, but the upside may be in jeopardy. Watch and be patient.

FXI – China’s news on spying and using attacks on US corporations in this country. The new impacted the Country ETF selling off 2.1%. The fund had already broke support at the $40.85 support of the trading range. The $39.30 support held short term, and is being tested again. Watch downside on this news. Broke support on Wednesday watch the downside play short term.

EEM – Still consolidating sideways and there no clear direction.

EMB – Emerging market bonds have bounced off the low, but has reversed to test again? Dividend of 4.2% is attractive if the volatility subsides.

PCY – Emerging market Sovereign Debt is testing back towards support again. Look for some clarity first and foremost. The dividend yield is 4.7%.