Another month is over and the markets continue to hold their gains through the first eight months of the year. One big challenge for long term investors (401k accounts) is peaking at the short term impacts on the market. A great example of late is the bantering with Russian and Ukraine. While the geopolitical impact of this issue is serious the impact to the global economies is not quiet so clear cut short term. There is the key concern relative to energy assets produced in the region and exports. Because of the uncertainty about the outcome of the issues it leaves speculation as the only method to filter possible outcomes. That leads to fear and that of course leads to emotions based actions by investors. For an example of this this the chart below of the S&P 500 index shows the move lower in response to the last action or activity by Russia towards Ukraine. On July 25th the index started lower on chatter/speculation about the issues. by August 7th the index had fallen more than 4% on the speculation. As this speculation proved to be just that, speculation, the index has climbed back up over 5%. The moral of the story… speculation causes volatility and emotional reactions. If the story had been validated and the index fell further we would have broken the uptrend lines and triggered our exit points for positions impacted by the move. A disciplined strategy to managing your money is the key to ignoring the rumors, speculation and emotions that lead to poor investment decisions. The goal is to remain focused during the month of September and manage our money as speculation and reality battle it out in the media and on the charts. Long term reality wins it is just having the discipline to allow it to play out. 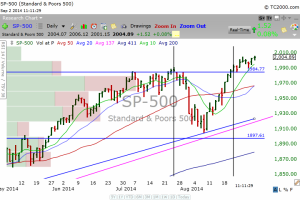 A look the returns for the major market indexes in August:

The S&P 500 index closed the month at 2003 breaking through the milestone of the 2000 mark and another new high for the index. For the month of august the gain was 3.7% and year-to-date the index is now up 8.6%. Thus our model is reflective of that as we have allocated 100% to the index. We continue to go with this allocation as stated below.

The worries remain with Russia leading the list for investors. The musical chairs that Putin continues to play with the international community and Ukraine has kept the markets on edge. The impact is more in the international markets than the US. If a war were to break out that would change the US outlook, but until that happens we are dealing with the day to day anxieties created. Europe on the other hand is suffering from the proposed sanctions. The bigger picture is in the energy sector as crude exports from that region have slowed. Throw in the threats by Russia to stop natural gas exports to Europe and you can see why the impact remains in play relative to the European nations. Again this is one of those issues that has too much speculation of what might happen versus something happening. Take it for what it is… a treat that could happen, and until it does happen the impact is more volatility than reality.

Economic data, for me, will tell the story for the broad indexes moving forward. We have experienced three months of gradually improving data and if that continues stocks should continue to trend higher in conjunction. The wild card for the US will be exports to Europe. Do the sanctions from Russia have an impact to the point their economy stalls. Watch and confirm the data for August is better or at least in line with expectations before buying into the speculation in the media about what may or may not transpire.

September is historically the worst month relative to overall performance. The S&P 500 index has only ended higher 45% of the time since 1945 according to statisticians. One simple thought of wisdom is to know that a watched pot never boils. All the talk about a correction in the index or the valuations are too high, etc. Watch the trendlines long term and follow them. If the price breaks through the long term trendlines we will worry and take a stance relative to reallocation. The chart below of the S&P 500 index shows the uptrend from November 2012 is still very much in play. The longer term trendline goes back to March 2009. This is why we still own the S&P 500 index in our allocation and until there is reason to change we will go with the trend. 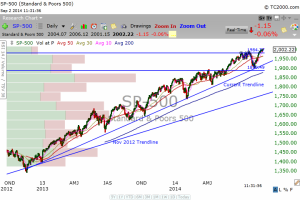 The chart below is the weekly chart going back to the low in March 2009 and you can see the uptrend line is still well in play. The close at the end of August is roughly 300 points off the trendline. That gap or white space between the trendline and the close is the volatility we could experience in the index prior to hitting exit points on long term positions. This is where you and I as investors have to make a decision on how we would treat the downside risk if and when it unfolds. For now we keep moving forward one week at a time. 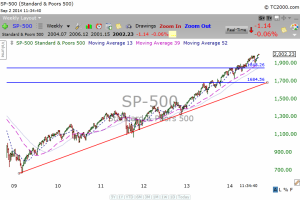 The key is to not confuse short term activity in the markets with the longer term time horizons. We will continue to measure risk relative to potential rewards, but the charts will always the deciding factor on how we determine to exit or stay fully invested.

One primary question still buzzing around the headlines is when and how much does the market correct or pullback? Again that is a speculation based question and it only conjurers up emotions when asked or framed by what is taking place in the broad indexes currently or looking forward. Stimulus is scheduled to end in October as the Federal Reserves cuts quantitative easing and bond purchases. That could lead to a rise in interest rates, but we will have to see how it unfolds. Higher interest rates are seen or believed to be drain on the economic picture going forward. This speculation has been around for awhile and year-to-date the thirty-year treasury bond has risen more than 17% while yields have declined near 80 basis points. Thus, if what you thought to be true, wasn’t… when would you want to know about it? Interest rates will rise eventually, but until they do stay focused on what you know to be true.

Energy, technology, consumer services and real estate have been the sector leaders for the broad indexes. They are the ones to watch in the event we do start to trade lower. If they fail to hold support and trendlines it will accelerate the selling andthe correction for stocks overall. Until or if that happens the trendline is still on the upside and we will honor the move relative to the trendline.

Be patient and most of all be disciplined.

The following is our current allocation for 401k portfolios:

If you don’t have Fidelity S&P 500 Index Fund in your 401k you will have a S&P 500 index fund that is similar with Vanguard or whomever the assets are managed by. If you need help simply send us an email with your list of available funds and we will tell you the best match to the allocation. Info@JimsNotes.com is the email address.

If you would like to share this update with your friends, neighbors or co-workers please do so, but ask them to sign up for JimsNotes.com to receive this update and other information every month in their email box.

Remember, investing is a journey towards a predefined destination. Sometimes the destination changes, but it will always be about the journey, and the discipline it takes to get there.