Why the change of heart/sentiment today in the markets? Some pressure from Asia to start the day on worries about slower growth. While that sounds like old news, it showed no signs of improving going forward and thus, renewed worries. That triggered lower crude oil prices hitting $91.40 on the day, and that is the current support levels in play, a break below that mark would offer $89.80 as the next level to watch. The bigger story is the decline in oil prices putting pressure back on the energy sector which declined 1.5% and XLE broke below the $93 support level we discussed last week. The ripple effect to stocks was evident as the broad indexes all pushed into the red. The NASDAQ was the downside leader shedding 1.1% on the day. The Russell 2000 Small Cap index lost 1.5% and confirmed the downside move from last week breaking the 1160 support mark.

The outlook is still cloudy at best relative to economic growth both domestically and internationally, and that is causing the current choppy market environment. Fear of the Fed raising interest rates has pushed bond yields higher and prices lower, the strong dollar has played havoc on the commodity sectors, and speculation has been driving stock prices. The recent outlook is for economic expansion in the US, but some are not buying into that belief. Looking at the charts gives you the best overall picture of what is taking place currently.

Energy: Break of support at $93 confirms the continuation of the downtrend currently in play off the July highs. 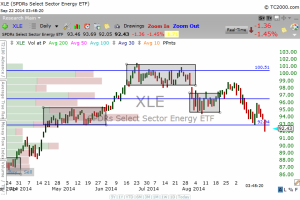 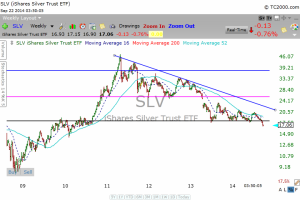 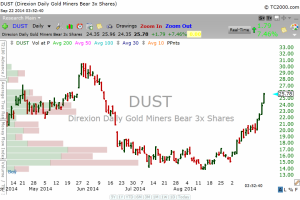 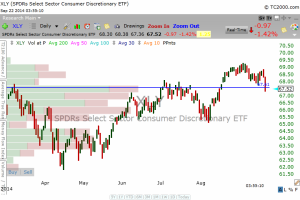 These are just a few of the examples of moves that mattered on the day. The sellers are gaining momentum again and unlike the last attempt are showing more conviction. How much more will or can the buyer add on the dip? The S&P 500 index tested the 1993 level again today and opens the way for more testing. More weakness in technology, energy and consumer services. There is room for the buy-on-the-dip crowd to step in, but I would be willing to let this play out before making a bold move such as that in the current environment.

The VIX index jumped back to the 14 resistance level and settled at 13.7 on the day. The trend is higher on volatility, but that has come with its own volatility day-to-day. This is one indicator to watch as we move forward this week. If the nerves rise and index follows suit it will indicate more conviction from the sellers. Trading the downside is a combination of patience and strategy just like trading the upside.

Tomorrow watch for the sellers to confirm their convictions or belief in the downside. If they follow through we will look at adding the downside to our position list and take advantage of the move short term. One day at a time remains the theme for now.