With the stimulus driver out of the way so to speak, the focus for investors has shifted back towards the economic picture for growth and the outlook for stocks. This begs the question of a pullback, test or correction relative to the broad markets. You can throw a dart and hit a negative article about the global economy or geopolitical concern somewhere. The pressure is building, short interest continues to grow, and we have to manage the risk of the market from both a short and long term perspective.

We don’t have room here to discuss all the issues building in the news, but the New York PMI dumped to -10.4 versus -3 in July. The expectation was for bump back into positive territory. There are problems in manufacturing. The ISM manufacturing data has confirmed weakness dropping below 50 the last three months. The news is getting serious when you look at the reality of the underlying lack of growth. This is the type of data that will eventually hit investors between the eyes and the downside will start to gain traction. We don’t have an economic policy in Washington currently, unless it is to get votes or add more regulations. The economic picture is worrisome at best, and the Federal Reserve has thrown its last pitch to save the econmoy short term.

Looking at Treasury bonds as an indicator looking forward the chart of TLT, iShare 20+ Year Treasury Bond ETF shows the drop in value as the stimulus rally gained momentum. The break below support at the $124.50 mark was as the recent break higher on the S&P 500 index cleared the 1420 level. The test of support at $120.60 and the 200 day moving average were another boost for stocks. In all the last four weeks shows a move lower in bonds as yields rise. All signs of investors believing the economic picture is or will improve. Thus, bonds are confirming what is happening in stocks. I believe this is one indicator to watch short term. If the news continues to show erosion in the economic data will bonds respond on the upside as money flows toward safety? No indications of that on the chart and the yields on the 30 year bond have moved back above 3%. 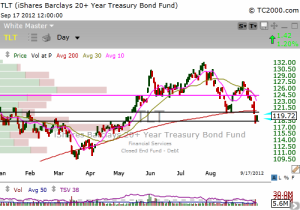 One other nagging thought on the bond issue is inflation. If there is a fear of inflation bond yields will rise as well. The  iShares Barclays TIPS Bond ETF has risen at the same time the Treasury bonds have fallen. They moved above the $121.50 resistance and the correlation is worth watching looking forward. CPI equally was much higher for August and is adding to the inflation concern currently. Thus, inflation may be driver for yields to move higher versus a stronger economy.

The dollar has been getting crushed under Fed policy to print more money in the form of QE3. UUP, PowerShares US Dollar Bullish Index ETF broke support at $21.75 last week and is in position to test $21.40. The policy of a weaker dollar has not been beneficial to trade as it has continued to struggle due to both Europe and China having weaker economies. There are plenty who believe this policy is bad going forward, me included. Look at the impact on oil and other imports. A weaker dollar acts as a tax on the goods. Looking for a temporary bounce in the dollar and then a continued decline. Watch UDN, PowerShares US Dollar Bearish Index ETF as a continued opportunity.

The leaders have been holding up, but we have to watch how they respond going forward. Technology (XLK), Financials (XLF), Retail (XRT) and Energy (XLE). The small move lower on Monday wasn’t the issue, but the negative news influencing investor sentiment is a challenge. We have to determine our focus relative to time frame and set our stops accordingly. All of our posts to the models have been short term or trades, thus the stops are getting tighter the more extended we get to the upside.

Commodities have been another leader of late on the stimulus offered around the world. Oil dumped on Monday in response to the “speculation” of a release in the strategic oil reserves. The demand side of the equation is such that it would be disruptive to pricing short term, but it would not be lasting as the declining dollar continues to pressure the price of oil. Watching for a trade opportunity as the story unfolds. Inflation worries will continue to fuel the price of precious metals as well. Base metals will go the route of China’s news and demand. Agriculture dropped on Monday as well in response to a drop in corn prices. The sector will continue to be volatile as the drought harvest is determined. Bottom line for commodities… volatility is back, but the uptrend remains in play.

Overall the issues are on the side of growth for the economy. There is nothing new in that, but I do expect the volatility picture to rise relative to the outlook. The VIX index has been low to lower without much in the way of concern, but that picture is changing. Throw in the geopolitical unrest building around the world, the year end fiscal cliff for the US and the US presidential elections inching closer, and you have plenty of issues that could create worry, which in turn creates volatility.

Watch, set your stops and manage your risk both short and long term.