I am going to call this separation Thursday! Breaking the sectors down today you had the defined leaders and the rest. Telecom (IYZ) jumped 1.7% on the back of Verizon gaining 3.5%. Utilities (XLU) up 1.6% finally playing catch up across the board with interest rates dropping on both the 10 and 30 year Treasury bonds. Basic Materials (XLB) were up 1.2% tor move back towards the September high as gold led the mining stocks higher. Consumer Staples (XLP) gained 1.1% and is in the process of completing a double bottom pattern. You get the point… it was a good day for those that had been lagging to catch up to the other sectors on the upside.

The leadership from Small Caps (IWM), Midcaps (IJH), NASDAQ (QQQ), Technology (XLK) and Financials (XLF) remain intact as well, but trailed the other sectors on the day. Thus, separation Thursday was one catching up if you were behind and continuing to move higher if you were a leader. The Dow started down  more than a 100 points on the day closed down just 2 points. IBM accounted for the negative action in the index.

The S&P 500 index moved to a new high breaking above the September high today. I like the upside going forward assuming the earnings and economic data hold up. Last night we stated 1740 level was the near term target and with today’s mover we are almost there.

The NASDAQ hit a new high on Wednesday at 3834 and followed through today with a gain of 0.6%.  The NASDAQ 100 index followed suit as the large cap stocks regain their upside leadership. Watching to see if this holds going forward, but for now it is helping our plays on the index. The leadership remains.

The Dow tested back to the 20 DMA on as IBM ended the day down 6.3% on a poor earnings report. While the index managed to fight back to even on the day if still shows the issue relative to earnings and the potential impact going forward. Remember that earnings have been taking a back burner to the budget negotiations, and with them out of the way we may see more of this type of reaction.

The chart below is Financials (XLF) and this is sticking with the theme we posted last night with JP Morgan. The double or triple bottom was attempting to break above the previous high near $54, which it did without much conviction, but a follow through would be a positive for the stock. Similarly, XLF is hitting against resistance at teh $20.90 level which corresponds to the July and September high. A break through this level would be a breakout from the pattern setup and trigger a further upside opportunity in the sector. Earnings will remain the trigger from my view as the banks continue to announce the third quarter data. KBE confirmed a move above teh $31.05 resistance and KRE confirmed a move above the $36.60 resistance. KIE broke to a new high and remains a leader in the sector. 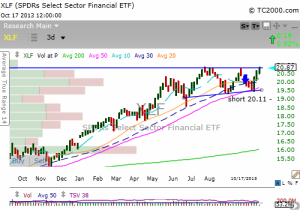 Sectors to Watch:
Utilities broke above resistance and is in a position to move higher. Real Estate moved through another resistance level and is benefiting from the drop in interest rates along with Utilities. Consumer Staples is in a wedge pattern and ready to make a run at a new high with a breakout move.  Energy broke to a new high the last two days and is worth tracking moving forward. Treasury bonds rallied above resistance as yields continue to fall in relationship to the Fed still pushing $85 billion into the system. The global markets rose higher hitting a new high today as well. Plenty of positives building in the market, but we have to remain cautious about the moves as there is plenty of data ready to hit the wires relative to the delayed economic reports and earnings. Take one day at a time with focus on the risk.

What to Watch Tomorrow:
Profit taking? We have not seen much in terms of profit taking from the 5% move of the recent lows. It is Friday and we may well see some selling at some point in the day. Set your stops and trade your plan. Don’t get caught up in the euphoria of the deal from Congress. There is a long way to go and plenty of argument left to take place.

Less volatility on Tuesday compared to Monday, but there are still issues facing the markets as inv[...]