Another slow day for the markets as NASDAQ slips 0.2%, S&P 500 rose 0.1% and Dow was up 0.3%. There was plenty of talk about the State of the Union address tonight from President Obama? Not sure he will say anything we haven’t already heard, and we will see if there is any real impact on the markets tomorrow.

Bottom line no real changes based on today’s activity! Another boring day.

Economic data was overall positive today, but nothing market changing to report. Stay focused and be disciplined in how you approach the current market environment.

Plenty of correction talk still in the headlines despite the shift in the technical data to more neutral on the market looking forward. Upside remains in play and we stick with the trend for now.

The NASDAQ 100 moved back to the 2760 mark on the day and is still in position to continue higher from the move above resistance. The move put the QQQ trade back in play on the upside with a test and go on the move. That makes tomorrow key on the upside opportunity.  Large cap technology stocks remain the answer to the upside for the index. Apple tested recent moves higher putting some pressure on the sector. 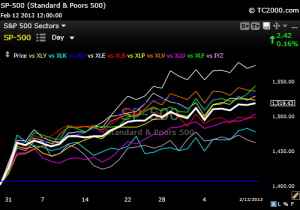 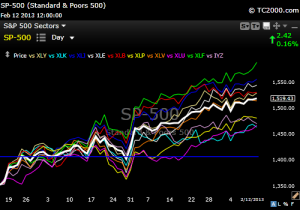 Financials – XLF moved above $17.50 resistance, retraced, and back above it again. Banks (KBE) and regional banks (KRE) both made moves higher again to set the pace. Hold for now and watch the downside risk of the sector if the broad markets shift momentum.

NASDAQ 100 – QQQ cleared resistance at the $67.30 level. $68.25 is the next hurdle for the sector. Watch the upside confirmation for opportunity. The post in the model is to test the break higher. None today, but the week is young..l patience as this trade develops.

US Dollar – The close near $21.87 (UUP) is at the downtrend line? Watch to see how this plays going forward and the support now becomes $21.70 level. Watch the bounce for evidence of a continued move higher.

Japanese Yen – Has the yen found the near term low… yet? FXY bounced of $104.70 low on Friday after the comments from Prime Minister. Downside back today as call for Japanese stocks to move higher. Watch the stocks for the upside trade on EWJ.

Treasury Bonds – The current play is short with TBT in the model currently to take advantage of the move lower in prices. The last week the fund has bottomed and started to consolidate. Watch for a reversal or upside in the bond if stocks start to trend lower.

High Yield Bonds – HYG = 6.55% yield. The fund has faced a drop in price this week and hit our stop at $93.75 (HYG). Support is at $92.75, which has held short term and the fund jump 32 cents today. We will watch to see if support holds and then make a determination on the upside play if it evolves.

Corporate Bonds – LQD = 3.8% yield. The price has found short term support ($118.90). Now watching to see if any upside opportunity exist in the bond.

GSG – Holding near the high as the overall commodity index maintains the modest uptrend in play off the November lows.

UNG – Dropped 5.2% on the inventory data last week. $18.27 support for the ETF was tested intraday, but closed above that level on Monday. Volatility is back and not interested in the emotional guessing game currently for the commodity. FCG is worth watching relative to break from the trading range and attempting to move higher. Got the test today and held support. Watch to see how this plays out tomorrow.

OIL – Crude is tested support at the $95 level as the chart develops a rolling top, but managed to gain 1.3% on Monday and 0.5% on Tuesday . Manage the position, but let it have some room to move as volatility picks up? Manage your stop on OIL at $22.40.

GLD – Downtrend line still in play with support at the $160 level. Broke below $160 on Monday and put the downside in play again. Watch the uncertainty around currency and economic growth globally. The talk about the G-7 nations to avert a currency war sent the metal lower on Monday. This is all speculation once again driving price.

DBB – Base Metals need to clear the $19.70 as they attempted on Friday.  Watch for the continuation of the play higher.

PALL – Palladium tested $73.60 on some selling last week. The upside is still in play as well as the uptrend. Adjust your stop accordingly and let it continue to run.

PPLT – Platinum tested lower and is filling the gap left behind on the move to new high. Broke the support at $167 and triggered an exit short term from the metal. Watch as next level of support is $164.40.

EFA – Dropped 2.6% last week to test the uptrend. The support levels are key and it closed above the first level at $58.15 again today. Uptrend remains in play. Nice bounce on Tuesday – watch.

IEV – Dropped 4% for the week and is testing the first level of support at $40.  The challenge is worries escalating relative to the sovereign debt in Spain. My upside target remains $45.50, but the upside may be in jeopardy. Watch to see how this plays out short term. Nice bounce on Tuesday – watch.

FXI – China broke support at the $40.85 support of the trading range. The $39.70 support is the level to watch short term? The drop hit the stop giving the opportunity to play whatever develops short term up or down.

EEM – $43.85 support was broken, but bounced back and sitting at that level. The downside is not accelerating and we will watch to see how this unfolds. Stopped out of our positions on the move lower and now we watch for the next opportunity.

EMB – Emerging market bonds have bounced off the low and could offer some upside short term plus the dividend yield of 4.2%.

PCY – Emerging market Sovereign Debt is finding some support and attempting hold and move higher. The dividend yield is 4.7%.