The economic data is still providing hope as the ISM Services hit 55.4% versus the 54% expected. This was in line with the ISM Manufacturing number last Friday exceeding expectations. September and October data have been better overall and showing a continued slow growth in the economy. The production grew to 59.7% from 55.1% for October. Employment gauge posted a gain as well to 56.2%. New orders fell to 56.8% vs 59.6% a month earlier. Bottom line… positive number, but little in terms of impact on the market today.

Home prices grew at the fastest pace since 2006. The annual rate of growth reached 12% for September as prices rose a modest 0.2% for the month. Inventory remains modestly low and demand remains on the positive side. The housing sector continues to recover despite all the negative press about interest rates rising on home loans. Both XHB and ITB continue to consolidate in a trading range near term. Not enough positive for the homebuilders to drive prices higher on the stocks. TREX broke higher and it is setting the pace the last week for the sector.

The calls continue for the market to correct or sell from the current levels. It started to look like they would follow through with the Dow off 117 points early. The index fought back to even on the day! The buyers remain in control despite what the ‘professionals’ or media believes about prices near term.

Stimulus concerns were back in play today with interest rates climbing again on Treasury bonds. This is turn pushed the interest sensitive assets around yet again. It ain’t over til’ it’s over, but the worry is taking root and the pricing in of the event is definitely in play. How much of a move will be priced in is where the question lies short term.

Overbought? Not sure what that means, but if it is an indication that stocks are overvalued relative to the fundamental data, not really. If we are saying that technical indicators are pointing to a pullback ,test, correction or other adjective to describe selling, yes, but they are not good indicators of when it will occur. The buyers are in control and until something convinces them to head for the exits we can remain ‘overbought’ for a long time.

The S&P 500 index held above the 1753 level of support short term. Our near term target remains at 1800 on the index and support is 1730 and 1690. The trend of the index relative to direction has been positive enough to keep the index in an uptrend with some sideways consolidation. The downside risk remains a possibility, but without some catalyst or conviction by the sellers, nothing happens short term. Need to see further follow through on the upside if the uptrend is to remain.

The NASDAQ remains in a sideways trek as it consolidates or digests to prepare for a further move upside. The rounding top on the index is still playing out short term and we will have to maintain a reasonable stop and keep moving forward.

The Dow rallied back from being down 117 points early in the trading day and is pushing on resistance at the 15,700 level near term. The double bottom pattern setup for the index is still a possibility going forward. A break higher would need some type of catalyst short term to make the push. Watch to see how this plays out going forward.

The Small Cap stocks showed the buyers are still present as the index gained 1.2% to regain some of the previous upside momentum on Monday, holding the gains on Tuesday. Watching for support around the 1085 level to hold and a move back to the previous highs and higher short term. We are not out of the woods yet, but the positive move was at least a beginning to resume the upside.

The chart today is the yield on the thirty year Treasury bond. As you can see the yield on the bond has been trending lower the since August. In September the Fed stated it would not start stimulus cuts and the bond rallied and yield fell. This has been the trend of late, but today the yield moved to the top of the descending channel and is now in position to reverse the trend. As we have discussed since the FOMC meeting last week, the shift in sentiment is purely due to the speculation the Fed will start stimulus cuts in December. Thus, the bonds are getting priced for the shift in view versus March or April timeline. The move today pushed TLT back below the 50 DMA, the price broke support at $105.40 with $104. 30 the next level of support. TBT has been the best hedge or play to take advantage of the current worries about the Fed cuts in stimulus. 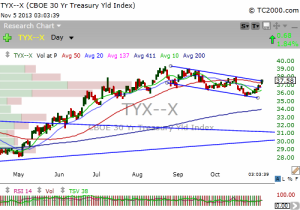 Other News of Interest:

17 million people will be eligible for Tax Credits under the Affordable Care Act. Seems like a oxymoron that it is affordable if that many people need a tax credit to purchase the insurance. The interesting part is how many can afford to purchase the insurance and wait for the tax credit after the fact. Better yet, if they may not even pay any taxes? What good would the credit be? Based on all the issues facing the new healthcare plan, it is easy to see how well thought out the bill was before it was passed by Congress and signed into law. Yet another government spending project that is fix it as you go. To top it all off today there was meeting at the White House to working on the fixes for the website:) and to make sure that those consumers whose insurance will be cancelled know what their options are. Wow, glad to see how well thought out that issue was. By the way, I got a letter from my insurance company stating my policy had been changed to comply and the premium increase would be $430 per quarter. I feel much better now that my wife and I at the age of 55 have maternity coverage.

Retail (XRT) pushed to a new high on Monday and followed through today. The data in the sector has been mixed, but the outlook for a better holiday season is on tap. In fact, most are so excited they are opening on Thursday night to help you get a head start on the shopping season. Yes, the tradition of black Friday is becoming brown Thursday. I know there are plenty of people upset about this move and they will voice their opinions loud and clear on the issue of family and tradition. But lets face it, $600 million was spent online last year on Thanksgiving Day. Whether online or in the store people are going to shop. I am not taking sides just stating a fact that the number one pass time in America is shopping not football.

Vertical Market Behavior? Yes, we are in the midst of that phase currently. Don’t believe it… look at a chart of IEV, iShares Europe 350 ETF vs SPY, S&P 500 index ETF. Last Wednesday following the FOMC meeting the S&P 500 index tested lower on the news that stimulus may move up to December. The Europe 350 index equally responded to the news. The US markets are definitely leading the global market direction and behavior. Equally looking at EEM, iShares Emerging Markets ETF you seem similar declines in the index. This is worth watching as we go forward. The call for diversified investing into the global markets has been in the headlines, but with this type of market behavior where is the real advantage currently? I will stick with the US markets for now and when they separate in response or offer a different beta I will look again.

What to Watch Tomorrow:
Trading notes for Wednesday will be published early in the morning. Be sure to review them for updates on positions and new trade opportunities on the pattern trading list.