Last Friday we were worried about the downside issues relative to the jobs report and this week we are discussing new highs on the S&P 500 and Dow indexes. What a difference a week makes. The move was a result of buyers wanting into the market more than the market makes economic sense. That said, we focus on taking what the market gives and protecting the downside risk as it grows ever bigger.

The news from JP Morgan and Wells Fargo was positive, but both stocks sold lower following their pre-market earnings release. The ripple effect to KBE pushed the bank ETF down 1.3%. XLF was off 0.75% as the broader financials sector fared better. From my view there were those analyst who didn’t like the sector and regardless of the numbers were willing to sell. Then there are the optimist who longer term believe the upside opportunity in the sector remains positive looking forward and these numbers didn’t really change any of that outlook. Thus, I am still looking for the buying opportunity in the sector more than the downside opportunity.

Same store sales gave a boost the retail stocks on Thursday, but today the March Sales fell 0.4% well below estimates for the month. The news prompted some mild selling, but for the most part the sector was holding up. The Consumer Discretionary sector actually posted a small gain on the day.

Moves to know for next week:

The activity today was higher with some intraday ups and downs closing near the high of the day. Still below average volume, but the bounce is in play and that is what we are trading for now. Watch the earnings news and any potential swings to the downside. Friday is setting up as a big day with the banks setting the earnings pace and retail sales reports for March. Same store sales in the morning as well.

The Retail Sales were down 0.4% and well off expectations. PPI showed less inflation due to gasoline prices, Consumer sentiment 72.3 and well below expectations. All combined sent the indexes lower early, but has been the pattern of late, they pushed higher throughout the day.

Take it away Johnny! The upside resume this week and that is that. We can all debate the issues facing the market relative to earnings, revenue, jobs, the economy overall, global issues, etc. etc. etc. If the trend is higher you go with the trend. If I had a dime for every time I said, that doesn’t make sense or, that isn’t right, I would be wealthy from that alone. The key is to be on the right side of the trade. With that in mind we toast the uptrend and wish it a speedy journey higher.

Volatility index – What volatility. Each time we get a bump in volatility the buyers step in to take advantage of what they believe is a buying opportunity. But, as with all good things they eventually come to an end. Until then we go with the upside and a trade in SVXY.

The February 25th low pivot point remains in play. We added the March 14th (Cypress and budget) high as the next potential pivot point on the downside, but the market has continued sideways more than down. The move last week pulled the index back below the close on the 14th keeping the upside in play and both the S&P 500 and Dow indexes hit new highs again. Healthcare (XLV) remains the leader off this low. Consumer Discretionary (XLY),  Utilties (XLU) and Consumer Staples (XLP) were on a positive trek to the upside as well. The Telecom (IYZ) sector has accelerated to upside. Technology (XLK) add to the upside momentum, but put it in check mode following the computer sales data. Basic Material (XLB) and Energy (XLE) are struggling to maintain an uptrend as the commodities take a toll on the sectors. Stay focused and protect the downside risk. 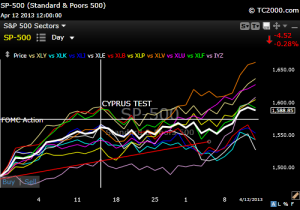 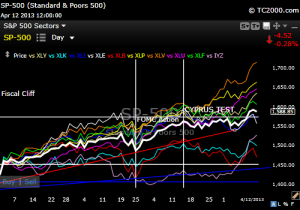 November 15th Pivot Point is the start of the current uptrend. Target 1550-1575 was attained and now there is pressure to test the move. The trend has overcome two attempted moves lower to maintain the uptrend. The move on Wednesday now makes it three attempts to break lower. Telecom and Technology are both making moves within the trend and showing some rotation in the short term leadership. Watch the trendline as the support on the current pullback. 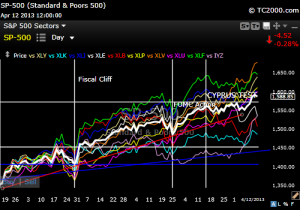 Transports – (4/12 post) – IYT sold off tested support and bounced. Looking for the leadership as an indicator on the economic outlook. You have to transport goods to sell them… thus leading indicator. Not looking to own near term.

Energy – (4/12 post) – Crude oil falls on demand expectations from the IEA and OPEC. Thus, the sector drops 1.7% Friday as a result of the news. I am still of the opinion that the improved outlook for production in the US will benefit the sector as well as the pipeline business for transporting the commodities. We will look at the best course of action to take relative to hedging and protecting the positions as we find the best opportunities.

Small Cap – (4/12 post) – IJR tested lower and rallied back near the previous highs. However, the weakness in the sector remains a concern. Watching more for a leading indicator than investing.

Midcap – (4/12 post) – IJH is in better shape than the small cap sector. Watching to hold near the current highs and then move higher short term. This is another position we will look at holding longer term and deal with the volatility as it arises.

Treasury Bonds – Yields on the 30 year Treasury is back to 2.91% following a mid-week bounce back above 3%. Economic data, some need for safety, you state the reason, but the great rotation from bonds has not occurred  At each sign of trouble money tends to flow back into the sector versus out. Expect more volatility in the price of the bonds a the worries and the optimist duke it out.

High Yield Bonds – HYG = 6.5% yield. Support remains at $92.75. Moving towards the previous highs at $95 short term. Manage the position for the dividend as the growth side is uncertain short term. I expect the trading range to remain near term. Use $92.75 as the stop.

Convertible Bonds – CWB = 3.6% yield. Price had been moving higher on the rally in stocks. Testing the highs again near the $42.50 level. Watch stops and protect your gains. Breaking to new high on Thursday? Watch the upside. 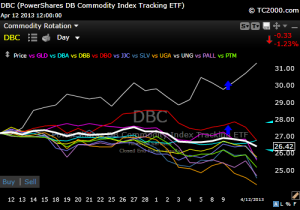 Global markets tested lower on the news in Europe and continue to trade sideways. The last few trading days we have seen some renewed moves to the upside showing up in the overall index, but also some interesting country charts as well. I have added those below with new comments.  The graph below has a starting point of the last low… still looking for a bounce higher short term. Mexico (EWW) has taken the leadership role currently.  Japan (EWJ) had moved higher as well showing solid leadership currently. EWZ, IEV and FXI have made a push, but no clarity yet. 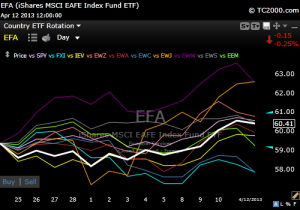 Real Estate Index (REITS) – IYR broke through the trading range near the high of $68.50-69.50 and continues to climb to new highs. The Sector is getting positive press on the creation of REITs to absorb the excess housing defaults from banks and Fannie Mae. The risk still has to be managed despite what anyone thinks day to day.