Interesting day for the broad indexes as they once again attempted a move off the low, only to retreat and close lower. The damage was once again minimal, but the fact that consolidation has now reached it’s fifth day, gives reason for concerns. The leaders are sagging and the outlook is still unclear thus, the stalemate relative to direction. 1682 is the level I am looking to hold on the S&P 500 index. The NASDAQ posted a second inside trading day and held the 10 DMA which is positive for the index heading into the balance of the week. The Dow broke support at 15,330, as we discussed in the trend watch section yesterday this opens the way for more downside. Still the one index to watch on the downside relative to leadership. We are still in a mode of patience currently and willing to let this unfold a little further and provide some clues on the direction short term.

Stock of the Day: JP Morgan
Law suits, whales and mortgage issues have been dogging the stock since July. The move lower of 11.2% over that time has taken some confidence out of investors relative to the stock, but it moved up 2.8% on Wednesday. Technically it produced a solid bounce off the 200 DMA. Why? The rumored settlement with the government for an $11 billion deal! There is an additional settlement being negotiated for $3 billion on other loan issues from Bear Stearns and other defunct assets JP Morgan purchased in the financial crsis. The bottom line… it removes some uncertainty  from around the stock and if the settlements do take place the company can move on with their practice of being a bank and brokerage firm. Good for shareholders and negates the head and shoulder pattern attempting to move the stock lower. Not out of the woods yet, but at least it is heading it right direction to get out of the woods.

Best Headline: “S&P 500 suffers longest loss streak so far this year.”
While the statement is true the challenge is in the details. Those five days have resulted in a 1.9% loss for the index overall. During which 250 stocks outperformed the index. The fact is the five days of selling are not as bad as it sounds. JC Penny gets the award for worst performance over the last five days losing 24.7% during that same period. It is still one of the key indexes to follow moving forward to define direction of the overall market. Being down 1.9% isn’t what any investor wants to see, but we are still in good shape relative to the trend. The need as stated above, is for clarity.

Short Trade of the Day: JC Penny’s
The stock fell to a 13 year low, leading the S&P 500 index on the downside dropping 15% on the day. Goldman Sachs projected sales at the department store would improve slower than expected and that raised questions on the liquidity of the retailer to meet monthly obligations. Definitely a problem child for the index and for the retail sector overall.

Economic Data:
Durable goods order were better than expected up 0.1%. It didn’t do much in terms offsetting the negative sentiment towards Washington coming to a resolution on the budget. New home sales were in line with expectations, but didn’t help the sector as the homebuilders finished the day flat. Household debt rose 0.2% showing consumers are borrowing again to spend… at least in the second quarter… old news. XLY has to be on your watch list on the news today in durable goods, home sales and debt showing the consumer remains engaged in spending, but the ETF is testing support at $60.25 currently.

Chart of the Day: iShares 20+ year Treasury Bond ETF (TLT)
The yield on the 30 year bond once again is declining closing at 3.64%, down from 3.93% in early August. The drop in yield has resulted in a rally in the bond price. As you can see below the low at $102.20 bounced and then tested again creating a double bottom pattern and bounced higher on the decline in yields. Yesterday we stated the move above the $106.30 resistance and today it followed through with a close above the $107 mark. The short term target for the ETF is $110.50. 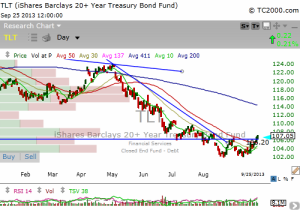 Selling Discipline: Hope is not a strategy!
The market has been testing lower for the last five days (major headline of the day!) and that should put us on guard relative to our short term or trade positions. Too often I speak with investors who turn short term trades into long term investments because they don’t want to or have no strategy for taking a loss on a position. It is vital to have an exit strategy or escape plan for any position in your portfolio. No one knows what will happen or what is on the horizon, we can only speculate and then let the market validate. If the market doesn’t agree with your speculation, don’t argue to be right, accept the loss and move on. There will always be another opportunity. Have a sell discipline as this market churns in place.