Day 1 of the Cyprus catalyst is behind us and many are still scratching their heads. Why does Cyprus matter? That seems to be the number one question in the media today. I am not going to rehash the multiple points being made and I am sure they have a thread of truth running through them, but in the end this is more about speculation than reality. Thus, we have to take the defensive side of things going forward. Scanning for rotation we continue to see developments on the upside along with some warnings.

Week starts on negative note and the ride could get even bumpier before the week is over. Stay focused, be disciplined and follow your plan.

Homebuilders index drops below expectations. There is plenty of data out this week related to the housing sector. Click link to review the information.

S&P 500 Index closed down along with the NASDAQ and the Dow. String of up days comes to an end.

The February 25th low pivot point remains in play, but we are adding the March 14th high as the next potential pivot point on the downside this week. As you can see on the chart the move lower is unanimous. Not enough on the downside to raise unjust concerns at this point, but we have to manage the risk should the selling gain any traction near term. 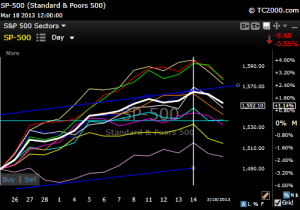 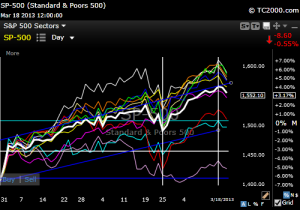 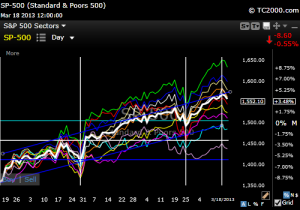 Telecom – On March 1st the sector established a  low and pivot point. It has continued to push higher over the last week making an attempt to head back towards the February highs. Added to the S&P 500 Watch List for entry. Not a positive start to the day, but fought back to close near break-even levels. Scanning the ETFs the following are worth watching:

Technology – The sector finally made a move above the top side of the trading range. Oops, didn’t hold the move today and testing range again. XLK broke above the $30 level and held. The entry point was hit on XLK and IGV. IGV is holding near the high and need to adjust the stops. Added to the Sector Rotation Model Portfolio.

Financials – Banks have been leading the upside as the stress test is passed. The selling was only 1% on Monday relative to the Cyprus. This could nag the sector and we need to manage our stops and potential downside risk.

Energy – The sector hit resistance at the $80 level and is testing the move higher. Watch for support to hold at $78.12.

Basic Materials – Moved back to resistance at the February highs. As seen on the rotation chart above the sector is one of the leaders and how the downside plays out will matter to the overall outlook. Watch for the sector to clear resistance and offer some upside opportunity.

Treasury Bonds – The volatility in the bond sector has risen short term and it is causing grief for investors. Watch and protect on the downside. Estimates are for 2.75% on the 10 year bond by year end? That is something to watch and play PST on the short side.

Convertible Bonds – CWB = 3.6% yield. Price had been moving higher on the current rally in stocks. Hold for the ride and raise your stops. Watch the renewed volatility today. 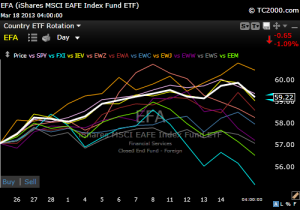