Friday was the perfect end to a volatile quarter for stocks. The up and down movement relative to the woes in Europe and the potential fallout to the balance of the financial markets was a constant news item. However, the EU at a summit meeting on Thursday announced a TARP like solution for the banking issues with a single supervisor of the euro-zone banks, and agreed to a  US style stimulus for growth. The agreement sent the global markets higher as many drew the conclusion all is well going forward.  We all know that is not true, but the relief of something being done finally that was at least proactive was a positive. How positive? Only time will tell.

The result of the move put the S&P 500 index in a interesting position. The close is right at a key resistance point. There is the June high of 1364 and the April low of 1357 and the index closed at 1362. Is there enough momentum left to break above this resistance or does it test first?

The current events will provide more of an answer than the charts as we head towards earnings and key economic data. The ISM Manufacturing numbers are out on Monday followed by an entire week of important data. If the data is positive the resistance is not going to be much of an issue, however if the data is not so great it will likely test. Bottom line, the news is still driving the markets short term. With earnings starting soon they will have an influence as well going forward.

The conclusion is likely to be more volatility. 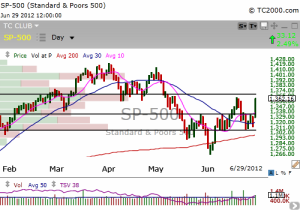 If we step back and look at what has been impacting the markets, trouble in the euro-zone, and assume the summit meeting conclusions were real, we could see investors ignore the bad news as history with a focus going forward of assumed growth. That would prompt a further rally towards the March/April highs. The move on Friday established a higher low off the June bottom. That is positive for the follow through on a potential trend reversal for the broad index. The follow through of a higher high would be the next stage of this trend development. Worst case for now is the sideways trading range remain in play.

The investor psychology is at play and it is a matter of how good of a mood they woke up with following a weekend to digest the European summit agreements. Does the prospect of a solution in Europe trump what is likely to be mediocre data at best? Whatever the results this promises to be a fun filled week of trading with plenty to digest and process. Manage your risk and let this unfold short term.