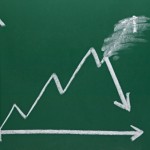 Opposite of the trading on Tuesday, but effectively the same results… trading in place for the major indexes. Today the opening rally was stifled some what by the not-so-impressive sales report for April. The headline number was well short of expectations and weaker auto and gasoline sales only added to the equation. The rumors/headlines are stating that consumers are saving their savings on lower gasoline prices versus spending them. It isn’t worth the argument relative to the opinions on this subject and I will let it go at that. For me the bottom line remains an investor that lacks clarity relative to the leading economic indicators and thus, they are less inclined to add risk to their portfolio. Based on the statistics release by Investment Company Institute and FactSet they show a lessening of assets exposed to equities. There has also been an exodus from bonds of late. Where is the money going? CASH… the safest of the sectors available to investors. Bottom line… a lack of clarity in two of the major asset classes creates a trading range or a sideways activity, but in the case of bonds it has created selling with a accelerated downside move the last two plus weeks. This leads me to the all important word we must practice currently… PATIENCE!

Treasury bond yields rose again today putting more downside pressure on the bonds. We stated on Tuesday a potential bottom being placed, but that didn’t materialize as the sellers returned today to take the bonds lower. As noted, it is the rate of change in the price of the bonds that is creating additional havoc to the equity side of the portfolio. We have hit all stops on bonds and continue to monitor what is next for the sector. All interest sensitive assets such as treasury bonds, municipal bonds, corporate bonds, preferred stocks, REITs and MLPs have declined relative to the rally in rates. Convertible and High Yield bonds have held up well during this period, but that is do the equity tie within the bond buffering some of the yield risk. You should still have stops under these assets in the event they get thrown out of favor. Until the bottoms are established and reversals in place… I have no interest in this sector near term.

Commodities are moving higher on the speculation of inflation, lower dollar and demand. Some rationals are valid some are purely speculation. We will take the trendlines as our guide and make technical trades only in this asset class. Too many contradictory opinions, data points and projections… thus, use the charts as a guide. Gold moved to the top end of the range today, silver broke higher from the four month consolidation pattern, gold miners broke above resistance and silver miners gapped higher. All gave entry points for those willing to accept the risk of the trades looking forward. The soft commodities are still struggling. Oil is stuck after a solid rise off the March lows. This remains a sector of choice for speculators or technical trades.

All said, another day in the books and no closer to a directional decision. Tomorrow is another day!