The last two weeks we have covered the topic of pattern setups for trading swing trade, position trades or longer term trades in our webinars (to view them send email to don@jimsnotes.com). In that vein I wanted to cover ten items today that are breaking out and look ready to continue relative to time horizon of the charts. I will also record this to give you more details with the charts as to the setup and the targets on each of these examples. First, as a reminder, pattern are nothing more than a consolidation period on the chart of the asset we are researching. Simply put, when investors are indecisive on the direction a stock will consolidate or trade sideways until which time investors are ready to commit to the direction up or down. Trend continuation breakouts from patterns tend to be more favorable for many investors as it follows the direction of belief of most investors. If a chart is in an uptrend in conjunction with the momentum of investors on the move higher and then it takes rest or consolidates over the next 10 to 30 trading periods (days on a daily  chart), as an example, the investment and the investor still have an upside bias, thus they are more inclined to follow the stock higher if it move from the consolidation in the same direction. A reversal on the other hand takes a shift not only in direction on the chart, but in sentiment from the investors holding the stock. That will take more convincing with data to shift the trend. Due to the moving parts it is important to have a defined strategy and approach to capturing each opportunity as it is presented.

1)  Biotech (IBB) tested the 50 day moving average and has bounced off support to keep the uptrend in place. Filtering the stocks we found Progenics Pharm Inc. (PGNX). The pattern setup is a descending triangle with a two week trading range at the support of the 200 day moving average. The break above the 50 DMA today gave an entry point for a short term trading opportunity on the upside. Entry $6.15, Stop $5.70, Target $7 initially. If it follows through and break through the top of the triangle pattern you have another setup for a trade and a revised target of $9.50 on the larger pattern breakout. 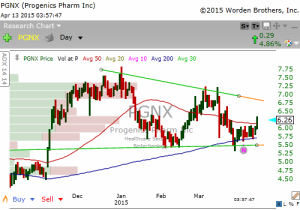 2)  Repligen Corp (RGEN), also in the biotech sector, broke from the triangle or wedge consolidation today. 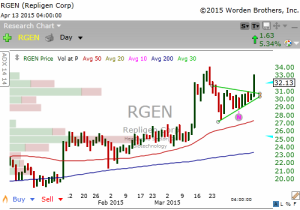 3)  Technology (XLK) has a ABCD pattern moving lower. The attempt to break higher retreated late in the trading day, but it is still in position to make a move higher short term. Watching for the follow through. 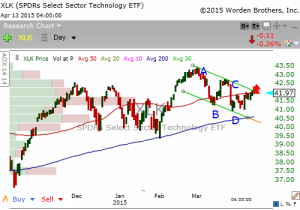 4)  Consumer Discretionary (XLY) has double bottom pattern and looking to break higher as a continuation of the previous upternd. A move above the $77 mark is the key short term. 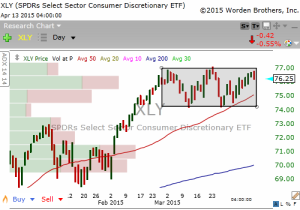 5)  Retail Sector (part of the consumer discretionary) XRT is consolidating with an ascending triangle ready to break higher and continue the uptrend. 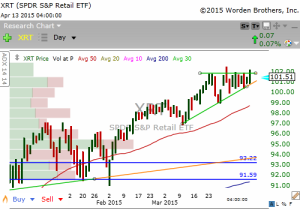 6)  Financial Sector (XLF) has been sluggish of late and shows in the chart of JP Morgan (JPM) below. The ABCD pattern broke on the upside today. Earnings are in the morning before the bell and that will set the tone for a follow through on the upside or retest of the low end of the range. 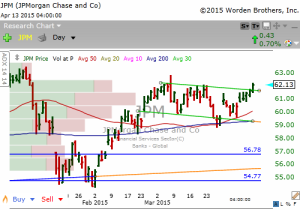 7)  Kinder Morgan, Inc. (KMI) the energy MLP is attempting to break through the top end of the four month trading range. With oil prices holding with the current range the MLPs have picked up in momentum. Look for follow through to the move higher. 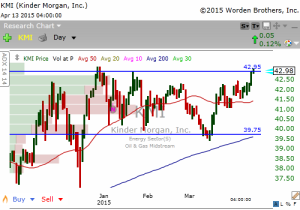 8)  Energy (XLE) building a trading range and has managed to break the first resistance level at $77.68. The next is $80.51  and then $82.50. Each break has provided a setup for entry. the second attempted today, but reversed and sold lower into the close. Still watching for this to continue higher. 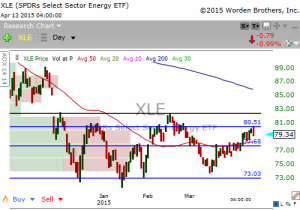 9)  NASDAQ 100 Index (QQQ) trading range and back near the high. Setting up to break higher short term. Small pullback at the close today, but in position to move. 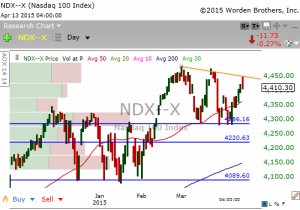 10) Anthem Inc. (ANTM) uptrend in play in the healthcare sectors and the pattern setup is a descending triangle. Uptrend is remains intact and break higher would be confirmation. 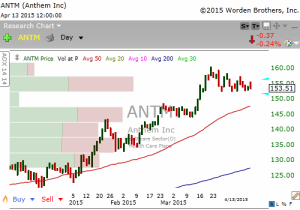 As we have stated in the webniars the goal is to use technical analysis with a defined strategy and risk management discipline. If you missed them as stated above sent and email to Don. Take ten minutes and listen to the video that goes with this post tonight. Remember this is earning season and plenty of financial data out the next couple of days from the banking sector that could and should have an impact on the sentiment, momentum and direction.